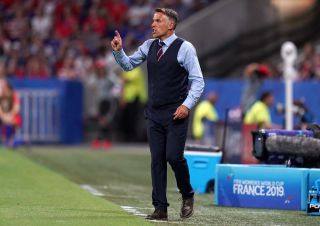 Phil Neville swiftly turned his focus to future targets after England’s bid to win the Women’s World Cup came to an end on Tuesday night.

Having suffered a 2-1 semi-final defeat to holders the United States in Lyon, Neville’s Lionesses will now play for third place in Nice on Saturday, against either Holland or Sweden.

England finishing as one of the top three European sides at the tournament has secured 2020 Olympics qualification for Great Britain, and Neville has said he will manage that team. Then the following summer, England host the European Championships.

“Before the game, it was the furthest thing from my mind, going back down to Nice, but now I’ve moved on from this already and now I’m looking forward to Saturday’s game.

“We have a three-year plan and I’ll see on Saturday the attitude, the concentration and the commitment of my players. And they won’t let me down, because they never have.”

Victory for England on Tuesday would have seen them reach the Women’s World Cup final for the first time. The US have now made it on five occasions, and are looking to become four-time winners.

The teams are ranked third and first in the world rankings respectively.

“It’s now (about) making us better and getting the next two, three per cent that will make us one of best teams in the world,” Neville said.

Gutted is an understatement. We gave everything but it wasn’t to be. Small margins make the difference & unfortunately they cost us on the night. I can’t express enough how amazing all your support has been, it really does mean a lot…Thank you ♥️ #Lionesses#FIFAWWCpic.twitter.com/IYRXInj6px— Nikita Parris (@lilkeets) July 3, 2019

“The aim is for us is to become the best, like America. We’ve still got a bit to go, but I won’t stop until we get there.”

He added: “Good luck to America. I think they showed they know what it takes to win games of football.

“I have to say it was the most enthralling 90 minutes I’ve ever been involved in as a manager. It is where my players want to be and it is where I want to be, and we are knocking on the door now.”

Midway through the second half, England thought they had equalised through White, only for her finish to be disallowed on a marginal offside call following a VAR check.

England were then awarded an 84th-minute penalty via VAR, but captain Steph Houghton’s effort was kept out by Alyssa Naeher, and Millie Bright was sent off soon after, being shown a second yellow card following a challenge on Morgan.