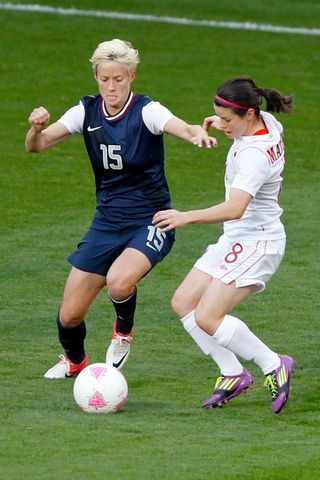 United States’ midfielder Megan Rapinoe has urged her team-mates to “think hard” about associating themselves with President Donald Trump.

The 33-year-old found herself embroiled in a row with Trump after footage shot earlier this year emerged showing her saying “I’m not going to the f***ing White House” when she was asked if she would visit should her team be victorious at the Women’s World Cup.

Rapinoe, who is openly gay, has previously attacked Trump, claiming him to be “sexist” and “misogynistic” and described herself as “a walking protest”, becoming one of the first athletes to join NFL star Colin Kaepernick’s protest against alleged police brutality by kneeling during the national anthem.

After team regulations were changed she now protests by refusing to sing the national anthem but her White House comments thrust her into the spotlight of the President who launched his own attack on her on Twitter, accusing her of disrespect.

It was an unwanted distraction ahead of their quarter-final against hosts France but Rapinoe refused to back down.

“I stand by the comments that I made about not wanting to go to the White House with exception of the expletive. My mom will be very upset about that,” she told a press conference.

“Considering how much time and effort and pride we take in the platform we have, using it for good and leaving the game in a better place and hopefully the world in a better place, I don’t think I would want to go.

“I would encourage my team-mates to think hard about lending that platform or having that co-opted by an administration that doesn’t feel the same way and doesn’t fight for the same things we fight for.”

Women’s soccer player, @mPinoe, just stated that she is “not going to the F…ing White House if we win.” Other than the NBA, which now refuses to call owners, owners (please explain that I just got Criminal Justice Reform passed, Black unemployment is at the lowest level…— Donald J. Trump (@realDonaldTrump) June 26, 2019

Asked whether the publicity had interfered with preparation, Rapinoe said it had had the opposite effect.

“I’m not worried about destabilising the dressing room. We have an incredibly strong dressing room and we are very open with each other,” she added.

“I didn’t make the comments at a press conference here, they were made months ago, and are just resurfacing. If anything it fires everyone up a bit more.”

Rapinoe has the full support of head coach Jill Ellis, who is also unconcerned by the media circus the comments created.

“I think this team has a remarkable focus, we all support Megan, she knows that,” she said.

“We know we have each others’ backs in there. For our players there is only one purpose, one mission, so comments in the media I think we can block out easily.

“Focus has been phenomenal and we are just genuinely excited. People tend not to realise the US team lives in pressure.

“There is always a target on your back. The players are built for this.”

She scored the winner to send #FRA to the quarter-finals ✨@amandinehenry6 is next up in the quiz hot-seat 💺@FIFAWWC_FRA | #FIFAWWCTV listings 👉 https://t.co/t64sDOmQGspic.twitter.com/OB1lyaAuzU— FIFA Women's World Cup (@FIFAWWC) June 26, 2019

France coach Corinne Diacre was happy to build up her opponents’ tag of favourites.

“When you come up against the United States there is no pressure, quite the opposite,” said the coach, whose side have not lost to the USA in three years.

“We are coming up against the best team in the world, the only pressure we have is to produce a good performance.”