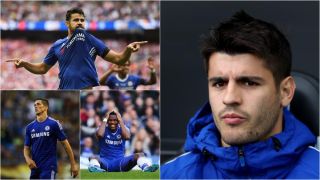 Chelsea secured the loan signing of Gonzalo Higuain on Wednesday as the club seeks to plug the hole it never quite filled following Didier Drogba's departure.

Over the last few years, several strikers have arrived at Stamford Bridge, with decidedly mixed results.

Even Drogba himself, who left after inspiring the 2012 Champions League triumph, made a return in 2014-15 to help the Blues to another Premier League crown.

Higuain, who could make the move permanent if Chelsea are willing to pay Juventus €36million, hopes a reunion with former Napoli boss Maurizio Sarri will spark a rediscovery of the form that saw him rattle in 36 Serie A goals three seasons ago.

And Chelsea, whose 40 goals scored is comfortably the lowest among the Premier League's top six, are praying they finally have a long-term solution to a centre-forward problem that has proven tricky to solve...

A TORRID TIME FOR TORRES

Fernando Torres actually arrived at Stamford Bridge in January 2011, when Drogba was still at the club. The Spaniard had torn Premier League defences to shreds with Liverpool but looked a shadow of himself after joining from Anfield for £50m. In terms of trophies, Torres' time at the Bridge was a success as he picked up the Champions League, an FA Cup and the Europa League but on an individual basis his spell was probably best summed up by an open-goal miss at Old Trafford having rounded Manchester United goalkeeper David de Gea.

A Champions League winner with both Barcelona and Inter, Samuel Eto'o signed a one-year deal at the Bridge for the 2013-14 campaign. The undoubted highlight of his nine goals in 21 league matches was a hat-trick in a 3-1 win over United, while he also raised a smile from manager Jose Mourinho with a celebration pretending to be an elderly man after the Portuguese had questioned the true age of his striker.

Easily the greatest success story of this selection, Diego Costa's goals inspired Chelsea's title-winning campaigns of 2014-15 and 2016-17 as he netted 20 in each. However, a row with manager Antonio Conte - who had told the forward he was not part of his plans - meant Costa was left out in the cold before securing a return to Atletico Madrid.

15 - Diego Costa's goals were worth 15 points to Chelsea in the 2016-17 @PremierLeague; more than any other player in the competition. Off. pic.twitter.com/zRnJt7ZN8c— OptaJoe (@OptaJoe) 21 September 2017

A loan from Monaco to United in 2014-15 had not gone to plan for Radamel Falcao, but that did not stop Chelsea from borrowing the striker from the Ligue 1 club for the following campaign. What followed was another year of anonymity that produced a solitary goal from 12 appearances across all competitions.

WHAT'S THE MORATA WITH ALVARO?

Chelsea's then-record signing, for a reported £60m from Real Madrid ahead of 2017-18, Alvaro Morata has looked increasingly devoid of confidence in front of goal. A return of 15 in all competitions was far from disastrous in his debut season but this term he has worn the look of a man who has forgotten what it is he is supposed to be doing. A return to Madrid is imminent, this time with Atletico.

A January signing from Arsenal last year, Olivier Giroud has been largely restricted to substitute appearances, with just 12 of his 31 Premier League outings coming as a starter, despite showing signs of an excellent understanding with Eden Hazard. What does the future hold for the Frenchman in light of Higuain's arrival?

The likes of Michy Batshuayi, Alexandre Pato, Loic Remy and Demba Ba have all tried, and failed, to fill the sizeable boots left by Drogba. Chelsea will be desperate for Higuain not to join that collection of struggling strikers.