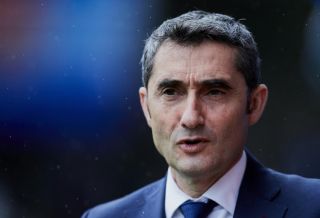 Ernesto Valverde hopes Barcelona’s 2-2 draw at Eibar will serve as a wake-up call ahead of the Copa del Rey final.

Lionel Messi scored a quick-fire double after Marc Cucurella’s opener, but the champions were pegged back in the last game of their LaLiga campaign by Pablo De Blasis’ equaliser.

Barca head to Seville to face Valencia next Saturday as they look to win a record fifth straight Copa del Rey.

And manager Valverde knows his side will have to improve if they are to complete another domestic double.

“All the matches serve (as tests), but Saturday’s match will be different because the teams are different and because this was marked by the fact that Eibar didn’t play for anything,” Valverde said at his press conference, according to Marca.

“We tried to gauge the intensity of the game and we were good in the first half, but in the second half we couldn’t overcome the pressure and we had fewer chances and we made dangerous mistakes.

“We are ready for the final and the game served us well because we were put in our place.”

Messi’s brace took him to 50 goals for the campaign in all competitions.

He ended the league campaign with 36 goals and claimed the top-scorer award for a record-equalling sixth time.

He ended the game playing alongside 21-year-old Barcelona B forward Carles Perez, who came off the bench to make his first-team debut.

He said, according to Marca: “I’m so happy, it has been an unforgettable moment that I will always remember.

“I wasn’t sure if I was going to get my debut this season, but the boss just said to be calm.

“I’m not used to playing on the left, but it felt good in the end.”

Barcelona confirmed right-back Nelson Semedo had “been taken to hospital for routine tests after sustaining a head injury” during the game.

[INJURY NEWS]Nélson Semedo has a head injury picked up in the game against Eibar. The player will remain overnight under observation in hospital in Bilbao. The player is expected to return to Barcelona tomorrow Monday. pic.twitter.com/wOVs7bcSwp— FC Barcelona (@FCBarcelona) May 19, 2019

On his squad’s other injuries, Valverde said: “We think that (Marc-Andre) Ter Stegen will be fine for the final and, while I don’t know about (Philippe) Coutinho, it will be difficult for (Ousmane) Dembele to play. I don’t know about Arthur.”

Eibar boss Jose Luis Mendilibar, whose side finished the campaign in 12th, said: “We have got a point that we had never achieved and we have also scored two goals against them, something we did not do against Barcelona either.

“I am happy with the game, we had our chances to win, but the draw is good.”