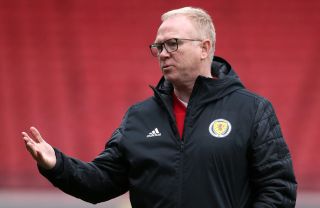 McLeish had it all to prove after being a largely unpopular appointment in the wake of the Scottish Football Association’s protracted pursuit of Northern Ireland boss Michael O’Neill. Some Scotland fans were against his return after he walked out on the job for Birmingham in 2007 and others questioned his recent credentials after his previous management role ended after a few months in charge of Egyptian side Zamalek in 2016. The feeling that his selection was an old pals act from SFA president Alan McRae and vice-president Rod Petrie, who was managing director at Hibernian when McLeish managed the Easter Road club, was reinforced at his first press conference. MacRae announced he had become “quite close friends” with McLeish about 40 years earlier and had been chairman of his testimonial committee.

Too much too soon?

Caretaker boss Malky Mackay was told to bring in some fresh blood when he took charge of a friendly against Holland immediately after Gordon Strachan was removed on the back of a seven-match unbeaten run. The likes of Barry Bannan and Christophe Berra lost their places while the squad underwent enforced change following the international retirements of Scott Brown, James McArthur and latterly Allan McGregor, who quit a day before the first squad of the European Championship qualifiers was named.

McLeish won seven out of 10 matches first time round including a second victory over France in the Euro 2008 qualifiers. Scotland ultimately fell short following a last-gasp defeat by world champions Italy, with an earlier loss in Georgia proving crucial, but McLeish’s first spell in charge evoked memories of a dynamic and positive manager. Former players Kris Boyd and Barry Ferguson both noted McLeish appeared a “different man” second time around. Boyd said: “There’s no spark there, no energy, no laughter, no fun or enthusiasm like I remember from working with him. He looks empty and drained.”

McLeish was hugely hampered by a series of injuries and call-offs while players such as Robert Snodgrass and Matt Ritchie, and latterly Steven Fletcher, could not manage to play for Scotland despite playing for their clubs. He overcame nine withdrawals to lead Scotland to victories over Albania and Israel in November and secure Nations League success and a guaranteed Euro 2020 play-off spot. But he then lost six of his starting line-up for the trip to Kazakhstan. Two of them, Ryan Fraser and Callum Paterson, dropped out because of the plastic pitch in the Astana Arena.

Conjuring another winning team proved too difficult but circumstances had gone against McLeish when both Kieran Tierney and Andy Robertson had to pull out just before the game, with Aberdeen midfielder Graeme Shinnie exposed for the two early goals as he reverted to his previous left-back role. Scotland could not recover and there was a feeling McLeish could not bounce back from a 3-0 defeat against a team ranked 117th in the world. The fact that Russia won 4-0 there days later while Scotland toiled for much of a 2-0 win over San Marino added to the feeling that McLeish’s time was up.