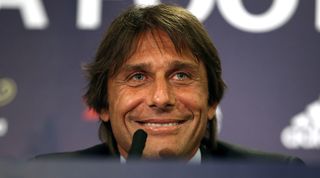 He’s been at Chelsea for just over a week and yet Antonio Conte has already taken charge of two matches. Both have come on the Blues’ short pre-season tour of Austria before they head off to the U.S. next week.

Conte has suffered varying fortunes in his two outings as boss, losing his first game in charge 2-0 to Rapid Vienna at the weekend, following it up with a 3-0 victory over RZ Pellets.

The big news coming from those games has been the Italian’s switch of formation. Gone is the tired-looking 4-2-3-1 that restricted Chelsea last season, with a new 4-2-4 system in place. It’s designed to give Chelsea more presence up top, but also control games when they have to defend, putting more bodies in midfield.

It’s not the only thing we’ve learned this past week about Conte’s new-look side, though. FFT takes a closer look at some of the key areas...

1. John Terry is still No.1 in defence

With no new defensive signings yet this summer, we may well be seeing Terry given a new lease of life at Chelsea in the coming season.

When the captain signed his contract extension in May, the impression was that he would be more cheerleader than brave leader in 2016/17 under Conte. No outfield player has played more minutes in pre-season than Terry, however, and he’s looking in good shape in the process.

It seems all those Instagram videos of him training during the summer have had the desired effect: the 35-year-old hasn’t looked troubled, and playing for so long at this early stage of pre-season has answered any doubts the manager may have had about his fitness.

When he’s healthy and at his best, there isn’t a better defender at Chelsea than Terry. He continues to defy age and if no reinforcements are forthcoming at the back, there’s every reason for Conte to turn to him to shore things up.

It seems a rather bold statement to make after just two games of pre-season, especially as Chelsea lost one of them. After all the problems the club suffered last season, though, Conte’s presence alone has been a significant boost.

The manager is talking a different language to what we heard this time last year. There isn’t any negativity around players Chelsea haven’t signed; Conte’s focus is more about what he is trying to achieve and being inclusive.

On the back of Euro 2016, Conte’s hand has been forced with his team selection. It was only this week that senior names such as Cesc Fabregas and Gary Cahill returned to training, but we shouldn’t allow that to deflect from the manager’s belief in his fringe players.

Papy Djilobodji was a punchline for Chelsea’s transfer policy last season and spent six months on loan with Werder Bremen. Under Conte’s new, more inclusive regime, we’ve seen the Senegalese play in both of Chelsea’s matches, along with others such as Baba Rahman and Victor Moses. There is a positive feeling coming from the dressing room again.

Add that to Conte’s undoubted quality from his technical area and it’s clear Chelsea are headed back in the right direction. With no European football to contend with this season, too, all that time on the training ground will allow Conte to drum his message home.

Whisper it quietly, but the Blues are back on the up.

3. Victor Moses has a Chelsea future

After struggling to get into West Ham's starting XI while on loan last season, Moses has returned to Chelsea in an attempt to resurrect his career at Stamford Bridge. On this evidence, he’s going the right way about it.

What does Conte desire most in players? The manager makes no secret of work ethic being a key characteristic and Moses has it in spades. He’s been electric in these opening two matches and if this continues, he has every chance of playing himself in Conte’s plans.

Moses has worked the flanks tirelessly against Rapid Vienna and RZ Pellets. Had it not been for some bad luck, he would have scored against the latter too. Instead he watched his shot bounce back off the post.

Moses is a grafter and Conte would have seen that this past week. He hasn’t done his chances any harm.

4. Branislav Ivanovic is under a real threat

After giving the ball away for Rapid Vienna to score their second goal in last Saturday’s 2-0 defeat, Ivanovic was subbed at half-time against RZ Pellets. It was more about rotation than tactics, although the performance of youngster Ola Aina after the interval showed Ivanovic up somewhat.

The 19-year-old looked strong going forward and was rarely caught out defensively. Aina demonstrated how effective his pace can be and despite his relative inexperience, wasn’t fazed.

Sure, it’s only a pre-season friendly, but with Ivanovic continuing to show the signs of decline we saw last season, Conte must surely be assessing the situation at right-back. Now that Cesar Azpilicueta is back training after his extended summer break, it’s only going to heap the pressure on.

For too long, Azpilicueta has been played out of position at left-back. Ivanovic hasn’t impressed against weak opponents in pre-season and with Liverpool, Real Madrid and Milan to play in the U.S., Conte may well be tempted to try something new.

Aina is showing himself to be a valid alternative in that area, with Azpilicueta more than capable of going back to his natural position on a permanent basis.

Aside from restoring Chelsea’s position at the top of the Premier League table, there’s a significant desire from Blues fans for Conte to give more youngsters a shot in the first team this season.

If this first week of pre-season is anything to go by, the signs are looking healthy. We’ve already mentioned Aina, while Nathaniel Chalobah and Ruben Loftus-Cheek have also featured heavily. Indeed, that latter pair both scored in Wednesday’s 3-0 win over RZ Pellets.

They face stiff competition for places. Chalobah’s preferred position in central midfield is looking congested now that N’Golo Kante has joined from Leicester, and he’s also competing with Nemanja Matic and John Obi Mikel. One of those needs to be sold if Chalobah is to stand a chance of breaking through.

Loftus-Cheek is now playing as the second striker, meanwhile, which is a completely new development given that he’s a midfielder by trade. That puts him up against Diego Costa, Michy Batshuayi, Bertrand Traore and Loic Remy.

With more experienced players available to him this summer, Conte has still given Chelsea’s youngsters plenty of game time in order to assess them. He’s studying what he has at his disposal, which can only be a positive thing if these players continue to perform like they have been.