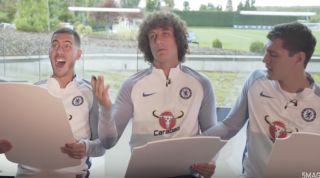 But before they could see their latest stats, the trio had to predict their own first.

Hazard was delighted to know that he was the eighth-best player in the game – and the best overall in the Premier League ("He has some friends there," Luiz chuckles).

But even with that knowledge, the Belgian gave himself a 5 for defending - a stat former boss Jose Mourinho might agree with.

Luiz was not a happy bunny, though. His overall rating has gone up this season – but his pace has been knocked down from 73 to 70.

What annoyed the Brazil international most, however, was that his shooting rating remained at 64 – worse than the notoriously goal-shy N'Golo Kante (66).

"This is impossible," Luiz grumbled to Rio Ferdinand Presents FIVE. "Come to training to watch and you will see. Even my left foot is better than N'Golo with his right."