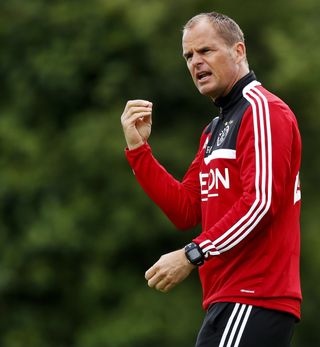 Frank de Boer has never claimed to be innovative but the way he's got Ajax playing could correctly be deemed revolutionary.

To cut a long story short, in the past two-and-a half-years as manager the former Barcelona man has won three successive championships but, more importantly, re-implemented the ideals of his forefathers.

His four-part framework consists of the 'four Ps': Principles, Passing, Possession and Pressing.

Since being catapulted into the job after Martin Jol's sudden resignation in December 2010, De Boer has been on a crusade to restore Ajax’s famed playing style.

On arrival he dismissed the football under Jol: "It did have some success but clashed with the traditional approach, which I know like the back of my hand. This is my club."

Firstly, they are no longer reliant on individuals; De Boer has forged a collective spirit where each player’s strengths combines to make a stronger XI. The whole is greater than the sum of its parts.

In their championship-winning seasons under De Boer, no player has managed more than 13 goals. "Football is a team sport," the coach stresses. "You don't become champion with a great striker, you do it all together. Our strength is that we are not dependent on one person."

It’s this approach that has allowed him to restore the swashbuckling football that was prevalent during the management of Johan Cruyff and Louis van Gaal (1985-97). De Boer was guardian of their philosophy as a player for 11 years and still is as manager.

De Boer has established - or rather re-setablished - universality: those under his tutelage are comfortable in multiple positions and roles, allowing Ajax's 'positional interchange' game to flourish. Essentially it’s a modernised, watered-down version of totaalvoetbal.

Their fabled '3-7 system', a defensive unit of three and the remainder in attack, lives on. "The philosophy is the same: create triangles on the pitch, engineer a numerical advantage in midfield, and create danger from that," De Boer told Champions Matchday.

They've accomplished this by switching to a 3-1-4-2 and 2-1-4-3 with defence, midfield and attacking lines playing close together. Meanwhile, their one-touch combination football results in increased mobility, fluidity and synergy. Rinus Michels once said a great Ajax team should strive to become masters of space. De Boer has kept his spirit alive.

De Boer, like mentors Van Gaal and Cruyff, is a passing fetishist. The highlight of every training session is the rondo (piggy in the middle) - De Boer joins in. If you can "pass at speed" there's a strong chance of selection. In his team it’s wholly necessary to pass until, in the words of Michels, "the right moment" arrives for a goalscoring opportunity. Patience is indeed a virtue.

The keystone is the 'third centre-back', a role occupied by the deepest midfielder – or single pivot – tasked with dropping in between the centre-backs, retaining and recycling possession. De Boer initially assigned this role to Vurnon Anita; upon his departure to Newcastle last summer threw a spanner in the works but Christian Poulsen, who described the role as his most challenging, has adapted smoothly.

The instillation of De Boer’s third centre-back (or "point guard", as one basketball-referencing Dutch journalist called it) has played a significant part in the Amsterdam side’s possession-based game increasing tenfold under De Boer: last season they averaged 612 passes and 61% possession per game.

In this season’s opening game against Roda JC, Ajax clocked up 746 passes with 60% possession. They rarely pass more than 10 yards during build-up play (“let the ball do the running,” as Cruyff says) but every one must be right. By rarely passing to feet, fluidity rules.

12 Poulsen to Alderweireld, Schöne to Sana, De Jong to Blind

Take, for instance, their passing combinations in last season's 3-1 Champions League win against Manchester City. Although no Ajax combination topped 14 passes - fewer than a typical Premier League centre-back pairing manage - the Dutch racked up 46 different combinations with five or more passes. Put simply, every player has several options on the ball, and every player is happy to receive it at all times.

The third centre-back shares traits with the No.4 role exemplified in the mid-90s by Frank Rijkaard. Poulsen, as he showed against Roda JC and throughout last season, helps form the defensive unit of three alongside centre-back pairing Toby Alderweireld and Niklas Moisander. That famous 'universality', however, has meant Christian Eriksen or Siem de Jong often rotate with Poulsen.

If you question the thought of diminutive Danish midfielder Eriksen replacing his six-foot compatriot as anchorman, ask Pep Guardiola, a former team-mate of De Boer at Barcelona: "Cruyff told us that the players with the best ball-handling skills should be the defenders,” the new Bayern Munich boss once noted, “as they need to bring you out of trouble and set up the forwards with their play." De Boer clearly agrees.

Ball-playing stopper Moisander had the highest pass completion rate for Ajax last season: in the group phase of the Champions League, only Xavi completed more passes. The Finn continued where he left off against Roda JC with 150 passes, 67 more than second-placed Christian Eriksen. His predecessor Jan Vertonghen, later picked up by Tottenham, described himself "effectively a playmaker" in De Boer's system; the same applies for Moisander.

Ajax play with a high line, so automatically there's a gap between Kenneth Vermeer, the skilled 'sweeper-keeper', and his defence. But, given Vermeer is like an extra outfield player and integral to the system, this isn’t a problem.

Ajax’s fanatical adherence to circulation football hasn't gone without criticism - some have even gone as far to describe their approach as "boring", a tag De Boer finds offensive.

Simply, it's of necessity that they play in this manner. Without the ball De Boer's side aren’t very good - and after all, possession is a defensive weapon. Keeping it controls the game; you conserve energy while the opposition tires, and opportunities are subsequently presented. It's long been the Ajax way.

Another Van Gaal concept De Boer utilises is pressure play. Ajax press the opposition the moment they lose possession (a tactic also used to great effect by Borussia Dortmund); it makes sense, considering the opponent has just expended energy by retrieving the ball.

De Boer demands possession be regained within three seconds, and this is usually done by forming a wall of three behind the Ajax player closing down.

If they haven't won it back, instead of falling back and regrouping they advance with a high defensive line with a compact 10-man wall. The distance between the last defender and attacking focal point is roughly 30 yards, and it’s a transition made easy thanks to each player’s proximity.

De Boer wants to follow his predecessors by leaving a legacy to behold - and he’s given himself a chance. In their respected, successful reigns, Cruyff and Van Gaal reinvented Ajax.

Ajax’s continuing improvement has made them odds-on favourites for this season's Eredivisie, but De Boer's challenge this season is making inroads into Europe.

"We want to move forward in Europe playing attractive football,” he said. “If we succeed I'm convinced we can achieve something." With him at the helm you wouldn’t put it past them.