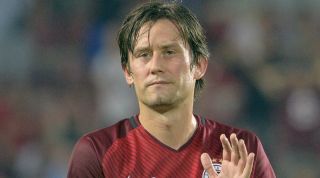 Rosicky made his debut for Sparta in 1998, before joining Bundesliga side Borussia Dortmund in January 2001.

The midfield maestro completed a move to Arsenal in 2006, where he remained for a decade. But despite winning the FA Cup twice, the Czech's time in north London was overshadowed by injury.

Rosicky returned to hometown team Sparta Prague last summer – the club where he first picked up the nickname of "Little Mozart".

On his debut off the bench in March, however, the midfielder suffered an Achilles injury which ruled him out for the rest of the season.

"It's like in life," he said back then. "If there's hope, you need to fight for it. I'll simply give it one more try."

Sparta Prague kicked off their new league campaign at the weekend, when Rosicky was handed his first Sparta start since November 2000.

Remarkably the 36-year-old opened the scoring in the 17th minute – much to his own (and everyone else's) delight.

Sparta went on to beat MFK Karvina 2-0 in what proved a perfect return.