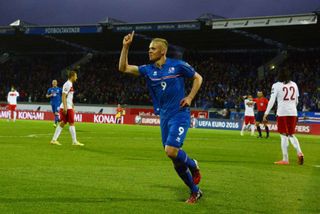 "I wouldn't say that I'm a hero," said Iceland coach Lars Lagerback on a rainy Sunday night in Reykjavik, moments after the tiny Nordic island nation qualified for the European Championship. "Martin Luther King, Nelson Mandela and people like that are real heroes."

The locals would surely beg to differ, though, after the Swede led his team to a 0-0 draw against Kazakhstan to ensure a memorable first-ever qualification to Europe's grandest football stage.

History was made too as Iceland became the smallest-ever nation to make it to the tournament proper.

The numbers have been bandied around plenty this week, but they are well worth repeating. Iceland is home to around 330,000 inhabitants, of which just 21,508 are registered footballers. Reaching Euro 2016 is an astonishing feat, without taking into account the fact they beat the Netherlands (twice!) to get there.

Iceland were drawn in a tough group that included European contenders Netherlands, Turkey and Czech Republic. While the Dutch were expected to clinch one of the two automatic qualifying spots, they now find themselves fighting for a play-off berth with Turkey. Part of the reason they are in this predicament is thanks to none other than Sigurdsson, who scored all three goals in Iceland's 2-0 and 1-0 wins over the World Cup third-place getters.

Iceland's only blip was a narrow 2-1 loss to the Czechs back in November, but they got their revenge by the same scoreline this June and can now take it easy with matches against Turkey and an already-eliminated Latvia to come.

READ ThisWelcome to Iceland: When FFT went to a 10pm top-flight tussle ... in broad daylight

"I would give credit to the youth coaches in Iceland. They are probably among the best in the world." – Assistant coach Heimar Hallgrimsson after the 0-0 draw against Kazakhstan.

When Lagerback took over as Iceland coach in 2011, the national team was coming off a demoralising Euro 2012 qualifying campaign, having won only once in eight games. The Swede was reported to have told Hallgrimsson that they would qualify for the 2014 World Cup. "I thought he was crazy," said Hallgrimsson, but Lagerback was almost proven right, with Iceland just missing out after an agonising two-leg playoff defeat to Croatia.

Trinidad and Tobago were in real trouble, bottom of their final qualifying group with only one point after three games. Their World Cup dream looked to be slipping away, after losses to the United States and Guatemala and a goalless draw with Costa Rica. Out went manager Bertille St. Clair and in came a cigar-chomping Leo Beenhakker. The wily Dutch coach was the shot in the arm the Soca Warriors badly needed, as he competely turned things around and led a charge back up the table. As the dust settled following the last round of games, Trinidad and Tobago were in fourth spot and set for a two-legged play-off showdown against Asian representatives Bahrain.

The resulting matches are now part of Soca Warriors folklore, as the team drew 1-1 at home and then came away with a 1-0 win in Manama to become the smallest country to qualify for the World Cup.

Drawn in Group B together with Sweden, England and Paraguay, the Soca Warriors had their day in the sun when they clinched their first-ever World Cup point with that commendable 0-0 draw against Sweden, despite being reduced to 10 men in the second half. While they would go on to lose to the other two teams by 2-0 scorelines, it was a proud moment for the Caribbean twin island nation.

"[Bahrain] didn't expect us to be as good as we were and they certainly didn't expect us to score. Once the final whistle went, it was just a case of timing your run to the middle of the pitch and out of range [from projectiles], and waiting for the madness to stop, which suited us just fine." - Hislop after the 1-0 win against Bahrain

Trinidad and Tobago fell only two points short of qualifying for the 1974 World Cup, but not for a lack of trying. A controversial game against Haiti was lost 2-1 after the referee disallowed an incredible five goals to the Soca Warriors. The match officials were later banned for life by FIFA, but it was scant consolation to the losers on the day.

Despite a 3-0 loss to Norway and a 4-0 thrashing at the hands of Greece in their last two qualifying games, Slovenia had done enough to squeak through to the Euro 2000 play-offs at the expense of the Greeks. Next up was a challenging home-and-away tie against Ukraine, who were boasting the likes of Andriy Shevchenko, Sergei Rebrov and Oleg Luzhny. A 2-1 win in the first leg was secured thanks to Zahovic and Acimovic and despite Rebrov's opener in Kiev, Slovenia equalised through Miran Pavlin to progress to their first European Championship on aggregate.

Zahovic continued his excellent scoring form at the Euros, netting twice in Slovenia's opener against Yugoslavia. Although they were 3-0 up against their opponents, Srecko Katanec's men could not hold on to their advantage and gave up three goals in the second half to at least gain their first point. Spain proved too strong in their second match, coming away with a 2-1 win (Zahovic scoring yet again), but the Slovenians exited the tournament with their heads held high after a final 0-0 draw against Norway.

"Those who expect miracles might be disappointed, but they can count on us exhausting every atom throughout the 90 minutes." - Zahovic on Slovenia's chances ahead of their first European Championship.

Despite all his undoubted talent, Zahovic was never far from controversy. After scoring four goals in qualifying to help Slovenia reach their first-ever World Cup tournament in 2002, the midfielder was substituted just over an hour into their first game against Spain in a 3-1 loss. Furious at being taken off, he insulted Katanec after the game and was banished from the team and sent home in disgrace. Shorn of their key player, Slovenia stumbled to two more losses and exited the tournament bottom of their table and with zero points to show for their efforts.

Kuwait made short work of their initial qualifying group, scoring 12 goals and conceding none to top their group with maximum points. South Korea were the team to lose out on this occasion, though it should be noted that they have qualified for every World Cup since. The final qualifying group proved only slightly more difficult for Kuwait, their only blemish a loss to China and a draw with New Zealand as they topped their group once again to qualify outright for the World Cup.

Czechoslovakia, England and France were to prove much tougher opponents for Kuwait in their World Cup group. Al-Dakhil allowed Kuwait fans to continue dreaming for a while more, but France brought them back down to earth with a thump in their very next game. While Abdullah Al-Buloushi scored their second World Cup goal in a 4-1 loss, the game is more famous these days for a goal that didn't count.

With Kuwait trailing 3-1 in the second half, French midfielder Alain Giresse broke for goal. Hearing a loud whistle from the crowd, the Kuwaiti defenders pulled up and watched on as Giresse slammed his shot into the back of the net. Although referee Miroslav Stupar initially awarded the goal to France, an incensed Prince Fahid, the Kuwaiti FA president, came down from the stands to argue the decision. Amazingly enough, Giresse's effort was then chalked off in an infamous incident that is now known as the "Disgrace of Gijón".

It hardly mattered, though, as France got a fourth goal to round things off before England beat Kuwait in the last game thanks to a Trevor Francis strike.

Kuwait's coach during their World Cup run was none other than Brazilian manager Carlos Alberto Parreira, who holds the joint record for most teams led to the World Cup. The other four teams he has coached at the tournament are Saudi Arabia, United Arab Emirates, South Africa and Brazil (twice).

In an incredibly tight group consisting of Northern Ireland, Italy and Portugal, only one team would progress. To everyone's surprise, it was the Northern Irishmen who finished top of the group, with the Italians failing to qualify for the World Cup for the first and only time in their history. It was a true team effort, with six qualifying goals being scored by five different players.

If Northern Ireland were hoping to take it easy henceforth, they were in for a rude shock as the World Cup group stage pitted them against powerhouses West Germany, Czechoslovakia and Argentina. Once again, the plucky first-timers upset the odds to make the knockout stages alongside the West Germans thanks to a play-off victory against Czechoslovakia. Striker Peter McParland was the toast of the dressing room, hitting a brace against the Czechoslovakians to add to his two group stage goals.

The quarter-finals was as far as they got, though, as France proceeded to beat them 4-0 with a certain Just Fontaine contributing a brace of his own.

"In years to come, when we reflect with the judgement and enchantment that distance lends to these things, we may marvel at the almost impossible feats we achieved…" - Blanchflower reflecting on Northern Ireland's amazing World Cup run.

With Gregg injured for the play-offs against Czechoslovakia, it was left to back-up goalkeeper Norman Uprichard to step up between the sticks. Things did not get off to a good start though as the Portsmouth goalkeeper injured an ankle early on, with the trainer doing nothing more than pouring whisky over it – as you do. Disaster than struck in the second half, as Uprichard broke his hand and had to play on due to a lack of substitutes.

Incredibly enough, he somehow managed to keep his opponents at bay as Cezchoslovakia failed to find an equaliser.