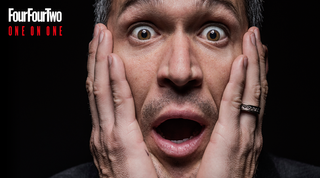 Three days after bagging their first Premier League title against Bolton, the Blues headed to Anfield looking to secure passage to a maiden Champions League final.

After the first leg of the duo’s semi-final had ended in a stalemate, Garcia’s dubious strike settled the return tie, despite strong appeals that the ball had not completely crossed the line before being hacked away by French defender William Gallas.

Liverpool went on to overcome Milan in a famous final, and Garcia reveals that Mourinho still disputes the goal that denied him the chance to win successive European Cups, having lifted the trophy as Porto manager 12 months earlier.

“He is still seething,” Garcia reveals in the October 2017 issue of FourFourTwo magazine, out now. “I knew him well from Barcelona and he tried to sign me when he went to Porto.

“After that semi-final he came up to me and wished me luck for the final. I have so much respect for him, as I saw how hard he worked to get to where he is now. He’ll always deny my goal, but if I was him I’d do the same."

And the 39-year-old says he will always be in no doubt about the validity of his ‘ghost goal’, insisting he had the best view of anyone inside a raucous Anfield.

“I celebrated the goal because I truly believe that I saw the ball go over the line,” he says.

“It all happened so quickly – but look at my movement when I hit the shot, and also as Chelsea try to clear it. It’s natural because I saw what I saw, and that was the ball crossing the line. I had never, and still have never, been part of an atmosphere like that. Chelsea were a better side than us over the whole season, but on that night we were faster, stronger and hungrier than them, and that came from the fans. You could feel the power of the people.”

Read the full One-on-One interview with Luis Garcia in the October 2017 issue of FourFourTwo magazine. A new signings special, we chat to Bernardo Silva and Davy Klaassen about their switches to Manchester City and Everton respectively and look at how Romelu Lukaku, Alexandre Lacazette, Alvaro Morata and Mohamed Salah will fare following their big-money moves to the Premier League. Plus, we reveal the 25 greatest Champions League games ever, meet the FA Cup’s youngest manager who set up a football club following the London riots, recall Derby’s disastrous 2007/08 campaign, learn about the science behind team chemistry and – in the first of a new interview format – hear the incredible story of Rochdale midfielder Joe Thompson, who has battled back from cancer twice. Order a copy here, and then subscribe!