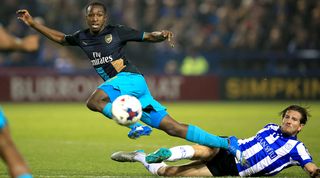 Glen Kamara isn’t happy. You wouldn’t have thought that possible for a 20-year-old who recently played first-team football for the boyhood club he was convinced about leaving this summer, and who was called up to Finland’s senior squad for the first time – but he has a pretty good reason.

The day before FFT sits down with the Arsenal youngster to find out more about an intriguing, if under-the-radar career so far, Kamara’s car is broken into by thieves. “Luckily they only got a Sat Nav,” he sighs, shaking his head.

Tomorrow he’ll have to get a lift from a team-mate to training – an even earlier start than usual for the midfielder, for whom 8:30am starts at London Colney are keeping him and Arsenal’s other youngsters on their toes at the moment.

Thankfully for Kamara, there’s plenty to keep his mind busy elsewhere. Just over four weeks ago he made his professional debut in the week he turned 20 by starting in Arsenal’s 3-0 Capital One Cup defeat to Sheffield Wednesday, partnering Mathieu Flamini at the heart of midfield and receiving his harshest – but surely most valuable – lesson yet as the Gunners suffered a humbling defeat.

Kamara may have lasted only an hour before being subbed off, but he self-evaluates his first taste of action constructively.

“We lost 3-0 which wasn’t a great result at all,” he concedes to FFT. “I could have played forward a bit more as a holding midfielder; taken more risks and not been too shy – maybe I was guilty of playing it back or sideways sometimes rather than turning and making a pass forwards. That was one of the things that came back after the game, but I can take positives out of it.

“The pace of the game is different to the under-21s. Sheffield Wednesday were really psyched up for the game, and it was really quick. You have to move the ball quicker and know what you’re doing next, which is very important. I think that was the only thing that surprised me.

“It was a massive experience just to get on the pitch and play. I definitely want more of it.”

So how much can under-21 football really prepare a player for the big occasions, then? “It can up to a certain point,” Kamara says. “Then I think a player needs first-team football, definitely – whether that be on loan or with the club they’re at. You definitely need something like that, though, until you can step up.”

Kamara certainly hasn’t been an instant superstar at Arsenal like Cesc Fabregas or Jack Wilshere before him. Born to Sierra Leonean parents, he spent the first 12 years of his life in Finland, playing indoor football during the harsh winters, before being taken on by Southend a couple of years after his mother fulfilled her dream by moving to London.

He's now in his fourth season at Arsenal, though, and it’s not unreasonable to suggest this is a potentially make-or-break campaign for him. And yet there’s an admirable relaxedness about the eloquent 20-year-old considering what’s at stake for him this season – and what could have been in the summer. Having seen his playing time in the under-21s limited by the arrival of Polish prodigy Krystian Bielik in January, the tough-tackling midfielder thought his spell in north London was up.

“At the end of the season I started playing a bit, but at the start of this one I thought I might be on my way out,” he admits. “I started looking elsewhere – I just wasn’t getting enough playing time, and as a third year you want to be playing in the under-21s.

“It was a bit weird – in the second year I played more than in the third year. I just thought ‘OK, maybe it’s my time to head elsewhere and show other people what I can do’. But with football you can never say you’re going to go here or there... it happens like that [snaps fingers]. Things just changed.

“You tell your friends that you might be going and they’re gutted! ‘You need that on your CV’ they say, or talk about girls or whatever. I’m not too worried about that,” he grins. “I just say to them, ‘Listen, I want to play football and not just tag onto the name’.”

Right now, catching the attention of Arsene Wenger is more important to Kamara than that of female admirers. So far the Frenchman has let the defensive midfielder’s football do the talking.

“He’s a very quiet man, his own man,” says Kamara. “I’ve spoken to him a few times, not that many, but I guess that will come soon hopefully. Some of the young lads do go to him for advice sometimes.”

Training with the first team more regularly has opened the Finland Under-21 international’s eyes to the level Wenger requires in a first-team regular.

“You know the calibre of players you’ve got there, it’s crazy!” he laughs. “It’s just amazing to be around them and see them in the flesh; to see how they conduct themselves.

“Santi Cazorla is amazing in training, his technical level is just out of this world. [Before injury] Francis Coquelin was very, very good too – he’s the same as he is when he’s playing games.”

Kamara is under no illusions of the task ahead, then. Before Coquelin, Wilshere was the last central midfield youth graduate to crack the first team, since when other talented young stars have threatened to – see Emmanuel Frimpong (now of Ufa), Henri Lansbury (Nottingham Forest), Oguzhan Ozyakup (Besiktas) and Chuks Aneke (Zulte Waregem) – but struggled.

Life for a hopeful central midfielder at Arsenal isn’t easy. Coquelin was a special case; a fluke even. Had it not been for injuries to Nacho Monreal, Calum Chambers, Mikel Arteta, Aaron Ramsey and Wilshere last December, the French enforcer wouldn’t have been recalled from his loan spell at Charlton. After sporadic first-team involvement over six years and three loan spells of varying success, an exit seemed imminent.

“But you have to be confident,” says Kamara, affirmatively. “I wouldn’t be here if I didn’t think I could make it.

“I know I have to improve on some things. My long balls, for example. I don’t play too many – I like to keep it short and snappy. I think because everyone likes to show for the ball at Arsenal it’s easier to just play that way than go for something long.

“The coaches are always talking about technique. Understanding of the game. Those are really big. Have I always had them? I think I’ve understood the game pretty well. Technically I’ve improved a lot since I’ve come here. Passing it to the right foot is a big thing.”

Whatever happens in the near future, Kamara has come a long way – quite literally. In June he was an unused substitute for Finland’s senior friendly against Estonia, having represented the country of his birth at U19 and U21 level. The Nordic nation was an entertaining – if often unforgiving – country to grow up in.

“At that point you played inside all the time, on the astroturf. In summer you’d get a lot of tournaments – we had one called the Hesa Cup, where a lot of different teams from all over Europe would come. We didn’t have the best team but we played against some very good ones. I used to play up front. I was quick and I scored a lot of goals, so I guess I thought I must have been alright back then. I liked to run past people.”

Great experience being in the senior Finland squad tonight vs Estonia, hopefully first of many! pic.twitter.com/gE1a5ohhPK

Racism, however, was occasionally problematic in a country that hasn’t been short of discriminatory issues down the years.

“It’s very different,” Kamara admits. “When I was younger you’d get a few name calls, the N-word and stuff, but I’d just shrug it off. There was the odd little scuffle but that’s about it. In my first team I wasn’t the only black player, but in the second I was. It’s more intolerant over there but it didn’t affect me.”

And nor does it deter him from representing the national team he always wanted to play for. “It’s a big honour, a really big honour,” he beams. “It’s where I lived and grew up, so now to represent them as a country is amazing. I never really had England in my mind like that to be honest. I love going back to Finland and getting to speak the language, because now I obviously don’t really get to that much.”

Soon there’ll be a new manager to impress, after Mixu Paatelainen was sacked in June with Euro 2016 qualification in tatters – but to do that Kamara will have to be playing. There’s no doubt in his mind that an imminent loan would be beneficial to his long-term Arsenal prospects.

“Yes, definitely,” he says. “This season. Where? Anywhere that plays decent football. I’d like to go abroad but I wouldn’t mind somewhere in England if they called.”

FFT poses one more question before we head back out into the November rain. Which one of his under-21 team-mates is most likely to make it in the Gunners’ first team?

“I could name a whole list!” [pauses, thinks carefully] “Alex Iwobi. He’s just a fantastic player; very good technically, and has his head screwed on properly on and off the pitch. He’s so focused – and he can play football. He’s playing as a winger at the moment but I see him as a No.10, and I think he does too.”

As usual, Wenger has no shortage of young talent to nourish.