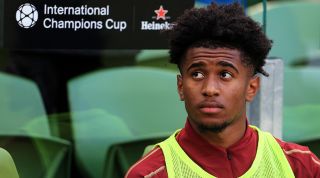 Arsenal are in a bind. If last season was transitional, this one feels pivotal for Unai Emery as he attempts to mould the team in his own image.

But therein lies the great paradox of modern football: how do you give managers time to develop a team, while also allowing for failure? Gary Neville said back in February that Emery may need all of 2019/20 as well to steady the ship - but we know from recent history that managers rarely get that much time.

There's one solution that could suit all parties: get the fans excited about the team again, give Emery more to work with and make Arsenal a more potent force next season. That solution is to give the Gunners' academy graduates a bigger role in the first team.

Cast your mind back to the 2007/08 season. Jose Antonio Reyes, Freddie Ljungberg and Thierry Henry all left that summer - three Invincibles. The only big signings Arsenal made were Bacary Sagna and Eduardo, neither of whom were particularly well-known players, and both came in for small fees even for the time.

Arsene Wenger was often unfairly maligned for focusing on youth, but that year, you couldn't blame him.

Arsenal didn't win the title, but they were close and played some beautiful football along the way. It was fun to watch, not just because of how they were playing, but because we were seeing young players getting better; developing; trying new things. But for Eduardo's leg break, who knows what could have happened.

The circumstances aren't exactly the same this summer but they're not a million miles away either. Arsenal's youth team is fizzing with promise right now: Reiss Nelson, Emile Smith-Rowe, Joe Willock, Eddie Nketiah, Jordi Osei-Tutu - and that's before you count Matteo Guendouzi, Ainsley Maitland-Niles and Alex Iwobi, each of whom can look back on good seasons last year. Hector Bellerin is one of the best right-backs in the league when fit.

The fact that Freddie Ljungberg - who impressed as Arsenal's U23 manager last season - has now been promoted among Emery's assistants suggests that pathway to the first team is there.

People may point to some exceptional circumstances in that first iteration of the so-called "Project Youth"; Fabregas being the main one. At the time he was one of the most exciting midfielders in Europe, playing at a level way beyond his years.

But a rising tide raises all boats. Fabregas helped make the rest of that team sing - not all of those players had the career he did, but they were still crucial in that squad. If one of Arsenal's young players starts to make an impact, the rest could follow.

The way that the Gunners finished last season felt like the necessary end of a forgettable era: limping over the line in the league, followed by that miserable Europa League final. These weren't glorious defeats. They were just defeats. I'm glad we're pushing hard for players like Kieran Tierney, and Wilfried Zaha would be great, but what if we don't get them? What then?

I want to be excited to watch Arsenal again. I want to see players trying things, getting creative, taking their chances. It'll be fun to watch, and there's no reason why it won't work.

Moreover: we have nothing to lose any more by trying.

Arsene Wenger: "When Arsenal played their first match without me, it felt strange"