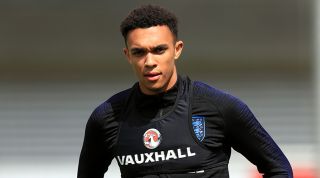 Alexander-Arnold's 33 appearances for Liverpool in all competitions last season were enough to convince Gareth Southgate that he was worth a place in England's World Cup squad this summer.

The 19-year-old right-back only made his Premier League debut in December 2016, but has impressed ever since and played his part in the Reds reaching last season's Champions League final.

As England's players prepare in Repino for their Group G opener against Tunisia on Monday, Alexander-Arnold has shed light on his support back home – particularly from his mum.

He told BBC 5 Live's World Cup Daily podcast: "She checks up every day to make sure I’m wearing sun cream and everything," said the teenager. "She’s so into the details.

"The whole family’s like that, we keep well in touch. I call them a couple of times a day.

"It’s them you want to make proud. To see them with a smile on their face and to be proud of me is probably the biggest incentive I’ve got in football."

Alexander-Arnold is England’s youngest squad member and made his senior international debut in the 2-0 friendly win over Costa Rica.

He says his Liverpool team-mate Jordan Henderson is a perfect mentor for him as he attempts to make his mark on the international stage.

"He’s definitely a mentor of mine," said the Merseyside native. "There are a few [players] you quietly sit and watch to see how they go about their day.

"He’s definitely one of the ones over the course of the two years I’ve been with the [Liverpool] first team I’ve watched closely, and I’ve tried to pick up things he does that can make me a better player."