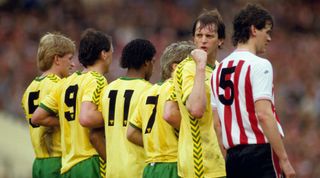 They don’t do a special programme and nobody books an open-top bus for the victors, but the Friendly Cup – occasionally sneered about as silly or pointless – is actually a justified source of pride between the two sides that infrequently contest it, Norwich City and Sunderland.

The gong harks back to a different era: 1985, the year of the Heysel disaster and Millwall’s rampage around Kenilworth Road, when English football slumped to a new nadir. As the supporters from Wearside and East Anglia came together to contest the Milk Cup Final, however, they decided that terrace mayhem wasn’t going to be a part of the deal.

Lowly league positions helped: both sides were languishing in relegation spots and viewed the trip to Wembley as a rare chance for a knees-up; Mackem and Canary mingled and drank happily together. “The Sunderland supporters were magnificent and everyone seemed to mix, it was light-hearted and very nice,” judged Norwich manager Ken Brown after his team had lifted the trophy thanks to a Gordon Chisholm own goal. On the London Underground, Norwich fans sang “we won the cup”, while Sunderland’s retorted with: “we scored the goal”.

Norwich currently hold the title and have the most total wins (14), with Sunderland victorious on eight occasions and five of the games ending in draws. Their next meeting on Saturday has obvious relegation implications – so will this rare and admirable togetherness hold?

In Texas they go big or go home. Show a Texan football enthusiast something of trifling dimensions like the European Cup and you’d get a Crocodile Dundee-style “you call that a trophy? THAT’S a trophy!” response, after which they’d wheel out a massive cannon and start shouting YEE-HAW at you.

We’re only partly jesting. As recently analysed in more detail by FourFourTwohere, the winner of the MLS clash between FC Dallas and Houston Dynamo – the Lone Star State’s twin powerhouses – is awarded an actual ruddy great weapon.

The cannon is beautifully named El Capitán, and is a replica of an American civil war howitzer, which was also in service when the Texans won independence from Mexico. Dallas actually fire it before the game – the PA announcer warns anyone of a nervous disposition first – but poor old Houston can’t let rip because of issues with their stadium lease. Dallas are the current Capitáns, having won the last three instalments. Boom, quite literally.

They used to chant that “Brian Clough is a football genius”, and the grouchy godhead’s greatest Keyser Soze-style stroke was surely leaving the earth with two sets of fans who absolutely detest each other still claim undying love for him. We’re sure it wouldn’t have worked this way if Fergie had upped sticks for a spell at Anfield following the 1999 treble, but somehow Rams forgive Clough’s Forest defection and still claim him as their own, as we examined here.

Whoever daddy loved best – and we’ll never know – his legacy lingers in the East Midlands cities. In 2007, officials from both clubs, Cloughie’s family and the Brian Clough Memorial Fund agreed to create an official tournament, the Brian Clough Trophy, for whenever the sides meet.

Keeping it friendly for Brian

His son Nigel’s stint as Derby gaffer sprinkled some extra spice, and the Rams currently dominate, with eight wins to Forest’s six (there have been four draws, all resulting in Derby retaining the cup). County prevailed in the latest edition, too, winning 1-0 in at the iPro in March thanks to Marcus Olsson’s strike.

Bly is one of those football figures to whom history has given a comic book sheen. The Geordie keeper, who turned out for Hull City over 450 times either side of World War II, ran a popular sweet shop in the city (the facade of which was recently rediscovered) and would shovel Murray mints and humbugs behind the counter on a Saturday morning before heading off to mind goal.

He was notoriously fearless, too, and operating in the health and safety regulation-free Bert Trautmann era, once completed a match suffering from severe concussion and a broken nose.

After Bly hung up his gloves in 1959, he remained a Boothferry Park regular until his death in 1982, and would often oversee kickarounds between the first team in the car park after training, awarding Mars Bars to the victors.

There’s no confectionary handed out after the Billy Bly Memorial Trophy, but the annual friendly between the Tigers and Conference North side North Ferriby United means his name lives on, with Billy’s son Roy presenting the trophy. Hull currently hold the honour, having won 2-1 at Grange Lane last summer.

Minnows vs Big Boys: the tiny teams who took on the giants

It’s easy to mock America’s ‘everyone gets a trophy’ culture, and to blame pointless participation trinkets being doled out willy-nilly for a whole generation going soft, wanting the moon on the stick and being unprepared for humanity’s impending doom.

But when did something being easy stop us from mocking? MLS teams, it seems, really do want to distribute a nice shiny award to everyone, which is why the culture of two-team Closed Cups is rampant. DC United and New York Red Bulls fight for the Atlantic Cup; Colorado Rapids and Real Salt Lake contest the Rocky Mountain Cup; Chicago Fire and FC Dallas meet in the hellish-sounding Brimstone Cup; San Jose Earthquakes play Seattle Sounders for the Heritage Cup; and Portland Timbers, Seattle Sounders and Vancouver Whitecaps have a hate-triangle round robin for the Cascadia.

It may be making America’s mantelpiece and silverware-makers great again, but it’s hard to keep track of. Nevertheless, FFT's favourite is the Trillium Cup, named after the official state flower of Ohio and the provincial bloom of Ontario. Home to Columbus Crew and Toronto FC respectively, the three-petalled plant has been invoked in a barmy attempt to inject fire into the ‘derby’ between two opponents who lie 430 miles away from each other.

Started in 2008 after the escalation of a cash wager between the mayors of the two cities, Columbus are 6-2 ahead and current holders, with the next instalment slated for May.