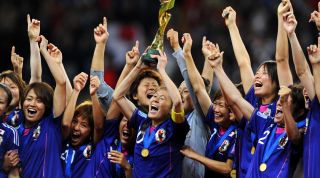 Here, we present Group C featuring the current champions back to defend their crown, an attack-hungry Swiss side and two rank outsiders...

Strengths: They're the holders, and rightly so. Japan had never beaten the USA before the 2011 World Cup Final and while some may say they still haven’t (Japan won on penalties), their energy, tactics and brilliance in possession four years ago made them worthy winners. Norio Sasaki remains in charge and recently led them to 2014 Asian Cup success which, surprisingly, was their first in 15 attempts.

Another major plus is Homare Sawa’s return to the squad after nearly a year out. Player of the Tournament and World Player of the Year in 2011, she was a doubt for this World Cup after Sasaki raised concerns about her fitness and they will benefit from her presence yet again. Yet another promising factor is the draw – all three of their group stage opponents (Switzerland, Cameroon and Ecuador) are making their first appearance on the biggest stage of all.

Weaknesses: Their recent record against others at the top table is not great, having lost comfortably to France, Germany (three times) and Norway in the last two years.

Expectations: The nation will not expect Japan to retain their crown but they will demand a good showing. Stylish play on the ball and hard work off it are habitual, and their passionate fans will not like a move away from those traditions.

Did you know? Before winning the World Cup in 2011, the Large Pink (it's a type of flower, and echoes a phrase praising the epitome of idealised Japanese womanhood) had failed to progress from the group stage in the three World Cup finals.

Verdict: They should come through their inexperienced group stage unscathed, and recent tournament successes will assist them as they progress further into the knockout rounds. The last four is a real possibility but retaining the trophy might be too much to ask of an ageing squad.

Strengths: This might be Switzerland's first appearance at a major international tournament but head coach Martina Voss-Tecklenburg is a veteran of three World Cup finals as a player with Germany, and won four European Championships. La Nati were ranked 26th when Voss-Tecklenburg took charge in 2012, and while their rise to 19th may not seem stupendous, they've made huge strides on the pitch.

In Lara Dickenmann they have one of Europe’s most talented midfielders. A league and cup double winner with Lyon this season, Dickenmann has joined Wolfsburg for the next two years and her ability to both create and score goals will ensure the Swiss don’t freeze in their inaugural World Cup experience.

Weaknesses: While scoring goals is not a problem with the quality of Dickenmann, Ramona Bachmann and commentators’ nightmare Ana Maria Crnogorcevic, defending has proved an issue in warm-up matches - they've conceded 13 goals in five matches leading up to the World Cup.

Expectations: Having never been here before, the Swiss don’t really know what to expect. They will want to see the attacking football that was so pleasing on the eye in qualifying and are hopeful that this will see them through the group stage.

Did you know? The Swiss cruised through qualifying, scoring 53 goals and conceding just once.

Verdict: An exciting tournament is in prospect for a team that believes attack is the best form of defence. They are likely to finish runners-up in Group C, which would see them come up against the second team in Group A, a task that shouldn't scare this talented squad. A place in the last eight is not out of the question.

Strengths: Having qualified for their first Olympic Games in 2012, Cameroon are now set for their first World Cup finals. Much of this is down to the performances of goalkeeper Annette Ngo Ndom, who conceded just four goals in six matches at the 2014 African Women’s Championship, where the Lionesses finished runners-up. At the other end, the good form of forward Gaelle Enganamouit, a regular for Swedish side Eskilstuna who sit third in one of Europe’s toughest domestic leagues, is a big plus.

Weaknesses: Their Olympics experience was not a good one. Heavy defeats to Brazil, Great Britain and New Zealand highlighted their shortcomings, and with group opponents Japan and Switzerland not afraid to keep the ball for long spells, they'll need to keep their shape and discipline.

Expectations: The nation has taken great pride in qualifying for the first time, and it's a country that is no stranger to successful World Cup appearances against the odds. However, a run to the quarter-finals like the men's team in 1990 is highly unlikely.

Did you know? Cameroon have qualified for all 11 African Women’s Championships but are yet to win the title, finishing runners-up on three occasions.

Verdict: Victory in their opening game against Ecuador is a real possibility, and could prove to be a great moment in Cameroon’s history. They might need to savour the moment, though, with Japan and Switzerland to follow.

Strengths: Ecuador come into the tournament as record breakers before it has even started. At the age of 26, Vanessa Arauz will become the youngest-ever head coach at a World Cup, and the role allows her to oversee all of the female sides within the association. Arauz has selected a number of players who have featured for the U20s, so there will be no surprises in how they are expected to play.

They benefited from the expansion of the World Cup to 24 teams, scraping past Trinidad and Tobago in the play-off thanks to Monica Quinteros’s 91st-minute header in the second leg of a narrow tie. Being the surprise package could be useful.

Weaknesses: They performed admirably in finishing third at the 2014 Copa America Femenina (helped by being hosts, thousands of feet above sea level and avoiding Brazil and Argentina in the initial draw) but defeats in all four warm-up games makes for poor preparation, as does their haul of just three goals in their last six matches.

Expectations: There were no expectations in qualifying, so being on the world stage for the first time is a great achievement for a nation somewhat behind the curve in the development of the women’s game.

Verdict: A scrap for third spot with Cameroon is the best they can hope for. If Italy-born Giannina Lattanzio, who scored three goals in qualifying, can repeat her good form of last year then they have a chance of avoiding the wooden spoon.