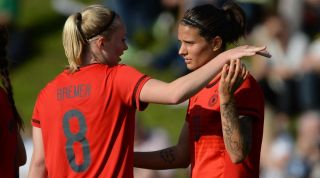 Strengths: World Cup winners in 2007 and 2003, Germany have never failed to reach the quarter-finals and the current crop show no signs of that changing. Head coach Silvia Neid, who will step down after the Olympics, is once again able to name a squad brimming with experience and quality. Five players won the 2015 Champions League with Frankfurt, while four lifted Bayern Munich’s first Bundesliga title since 1976. Behind every great team is a great goalkeeper, and captain Nadine Angerer has conceded just four goals in her 10 World Cup finals matches. Angerer has announced that this tournament will be her last and a third world title would be a fitting way to end.

Weaknesses: Not many. They will be without current World Player of the Year Nadine Kessler, who has recently undergone knee surgery, while the back four can look a little ponderous at times. Mind you, so could the men's at last year's World Cup finals, and it didn't do them any harm.

Expectations: Bettering the disappointing quarter-final exit of 2011 will be the first aim, but should they navigate their way through the last eight they will be expected to lift the trophy for a third time.

Verdict: The draw has been relatively kind to Germany. Thailand and Ivory Coast are both featuring at their first World Cup, while a repeat of the Euro 2013 Final against Norway (which Germany won 1-0) will provide a welcome test. Their path in the knockout stage could be tricky dependent on where they finish in the group stage, but they are ranked as the world’s best side for a reason. Expect to see them in the final on July 5.

Strengths: Being underdogs might just bring out the best in Clementine Toure’s side. Having scraped through qualifying for the 2014 African Women’s Championship, they performed well in the tournament group stage, taking Cameroon into extra-time in the semi-final before losing 2-1. They then faced a much-fancied South Africa side in the third/fourth-placed play-off, winning 1-0 despite being under pressure for the majority of the game. They boasted five different scorers at the African Women’s Championship, including three goals from talented forward Tia Vino Ines N’Rehy who plays for Russian side Rossiyanka.

Weaknesses: Boss Toure is likely to adopt the same tactics that were successful in qualifying, but Germany and Norway will provide much sterner opposition and will be less wasteful in front of goal. She'll hope that her side's pace on the counter-attack can expose opposition defences, but they will need the ball to do that.

Expectations: Ivory Coast weren't expected to qualify, so the rest is a bonus. Keeping the score down against Germany would be as good as a win but they will believe that victory against Thailand is a real possibility.

Did you know? Les Elephants are playing at only their third international tournament, having qualified for the last two African Women’s Championships. They are the lowest-ranked side at the 2015 World Cup.

Verdict: Toure believes that playing on artificial grass is going to be a major plus for her team, as they are used to the surface. But that won't alter the size of their task in matches against Germany and Norway. They could pip Thailand for third spot but are unlikely to reach the round of 16 as a lucky loser, due to possible heavy defeats against two of Europe’s finest.

Strengths: Major international tournaments are Norway’s strength. World champions in 1995, twice European Championship winners and once Olympic gold medallists, they have the mastermind of the 1995 triumph, Even Pellerud, back in charge. Pellerud also led them to the inaugural World Cup final in 1991, where they lost to the USA.

Their direct style of play might not win them too many admirers but it works. Emphasis is placed on work off the ball as much as on it. In attack, 19-year-old Ada Hegerberg has had a season to remember for double-winners Lyon, scoring 26 league goals and the equaliser in the cup final against Montpellier.

Weaknesses: Caroline Hansen was their top scorer in qualifying with eight goals, but has been forced to withdraw from the finals squad due to injury, increasing the pressure on Hegerberg’s young shoulders. At the other end, their usual steadfast defence has begun to leak goals, having conceded 10 in five matches before the tournament.

Expectations: Progression from the group stage will be expected and a quarter-final place respected. History tells us that they have the mentality to give the big names a run for their money and this will be the hope yet again.

Did you know? Norway are perennial qualifiers - they've reached all six World Cup finals and the last 10 European Championships.

Verdict: They once again grafted their way to a major final at Euro 2013 and the outcome could have been different had Germany’s Nadine Angerer not saved two penalties. The World Cup brings tougher challenges but they have the experience both on and off the field to go quietly about their business once again. A quarter-final appearance is on the cards, and if they play them right the Norwegians could progress further.

Strengths: Well, they qualified, and that might be as good as it gets for the first Southeast Asian nation to reach the finals. They did so by finishing fifth at the Asian Women’s Cup, ending the tournament with a -9 goal difference, but a 2-1 play-off victory against Vietnam secured the spot. There is a strong bond in the squad, however, and 19 of the 23 players picked featured as Thailand won the Southeast Asian Championship at the start of May. Nisa Romyen was the star with nine goals, including five in the 12-0 win against Laos.

Weaknesses: No experience on the world stage, and a squad that contains players who either ply their trade in the Thai League or at university make Thailand’s world ranking of 29th a little misleading.

Expectations: None whatsoever. Being drawn against Germany and Norway raised the levels of excitement but fans may have to resort to watching from behind the sofa. A point or three against Ivory Coast would be their greatest moment since winning the 1983 Asian Cup.

Verdict: Playing Germany in the final group stage game could be dangerous if the European champions need a big win.

The young squad will certainly gain from the experience, and it’s a chance to shine on the world stage, but they will only have three games to do it.