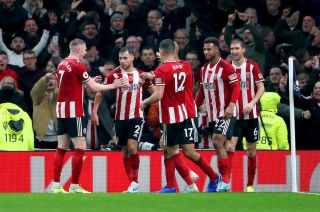 Sheffield United have been the surprise package this season in the Premier League.

Many tipped the Blades for an immediate return to the Championship but the club’s first top-flight campaign for 12 years has been a resounding success so far, with the team currently sitting sixth in the table.

Here, the PA news agency takes a look at some of the key players in the success of Chris Wilder’s side.

Wilder was eager to get the promising young goalkeeper back on loan from Manchester United over the summer, following his impressive performances last season as the Blades won promotion. His persistence has been justified with 22-year-old Henderson having kept eight clean sheets so far – the most, along with Leicester’s Kasper Schmeichel, of any goalkeeper in the division.

Henderson has been ably assisted by an organised and committed defence in front of him and few have contributed more than Basham. The 31-year-old, who made his 250th appearance for the club recently, has made 50 tackles and 97 clearances this season – figures which rank him in the Premier League’s top-15 players for both.

The former Manchester United trainee rarely gives the ball away and is ranked 14th in the Premier League for the total number of passes this season with 1,251. Ten of the players ahead of him are defenders, who traditionally dominate this statistic. The only midfielders ahead of him are Manchester City duo Rodri and Fernandinho and Chelsea’s Jorginho.

The striker leads the way for the Blades in terms of both goals and assists, the Frenchman having scored five times and set up three more for his team-mates – the same number of assists as George Baldock. That is despite starting only nine games and being on the pitch for less than half of the season to date – 889 of a possible 1,980 minutes.

The striker has had 36 shots without scoring in the Premier League this season – more than any other player. But McGoldrick’s value to the team is much greater than goals. The 32-year-old’s link up play is as good as any striker in the division and Wilder recently said: “He’s key for us, he’s a terrific player. You have to look at the bigger picture and he brings so much to the table. The fans love him.”