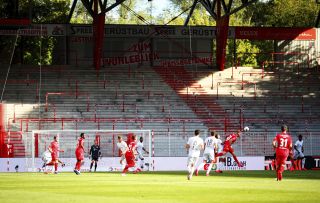 Major European football returned this weekend but the German Bundesliga was a long way from its usual self as play resumed amid the coronavirus pandemic.

With fixtures staged in empty stadiums and with social distancing regulations applied to the extent they could be, the rest of Europe got a glimpse of what could be on the way for their own leagues in the coming weeks and months.

Here, the PA news agency takes a look at five things we learned from the weekend

If you were hoping for some better insight into the instructions managers bark at their players during a match, now might be your chance. Every echo reverberates around the empty cavernous stadiums, every shout and kick is heard as games are played out in an unfamiliar, largely sterile atmosphere. Players did their best under the circumstances, many goalscorers pointing to the empty stands as though they were still full of shouting fans, though the novelty of this can be expected to quickly wear off. Coaches could be heard encouraging and admonishing their players throughout the games though sadly, the one thing many fans would still love to hear – the interaction between referees and players – remained out of earshot.

After all the debate over how the unique circumstances might affect the product on the pitch, the answer seemed to be not too much. Players may have only had a few weeks to get back up to speed after several in lockdown and unable to train with one another, but games were played at high speed and with plenty of quality on show, particularly from Borussia Dortmund who turned on the style in their 4-0 win over rivals Schalke. Four away wins from the eight games played over Saturday and Sunday might help feed the theory that home advantage has taken a hit, though none of those results taken on their own would constitute a big upset.

Players wore facemasks during warm-ups and in the stands – where substitutes sat at least two metres apart – while the coin toss was undertaken with a safe distance between all involved. Some teams took the precaution of changing into their kits at the team hotel before heading to the stadium. Given players then got fully stuck in as soon as the whistle was blown, there was then some criticism that all of the above had only been done for show. But then given the spotlight shone on them not only in Germany but around the world, there is no real harm in football trying to set a good example, is there?

Former Manchester City and Celtic defender Dedryck Boyata was forced to defend himself after pictures circulated of him apparently ‘kissing’ team-mate Marko Grujic in what was said to be a celebration during Hertha Berlin’s 3-0 win at Hoffenheim. But Boyata later posted a video of the incident on Instagram to show it took place when the game was still goalless, and he was in fact giving Grujic, on loan from Liverpool, instructions before a corner kick. “We must definitely be careful now that we play under this situation,” Boyata wrote. “We have to adapt our way to play or celebrate.”

Whatever else has changed, there is still a place for VAR to cause controversy as it made major interventions in two of Saturday’s closely-fought games. Augsburg lost 2-1 at home to Wolfsburg, but only after Felix Uduokhai thought he had put the hosts 2-1 up before seeing the goal chalked off, but the bigger controversy came as Freiburg were denied an upset 2-1 win away to RB Leipzig, with Robin Koch’s stoppage-time goal ruled marginally offside.