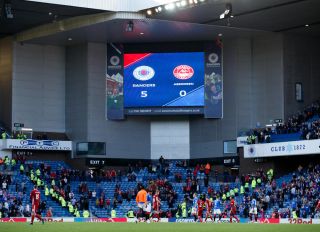 The champions had earlier been held to a 1-1 draw by Hibernian at Easter Road.

Here, the PA news agency looks at five other things we learned from the weekend’s action.

Celtic are not infallible

🗣️ Neil Lennon: "I thought we dominated the game. We looked a little bit flat in the final third on occasion and our finishing let us down." #HIBCELpic.twitter.com/BM46eUvhQG— Celtic Football Club (@CelticFC) September 28, 2019

Neil Lennon’s side were enjoying their best start to a season for nine years but could not extend their winning sequence to seven matches. Lennon was fairly relaxed about his side’s performance after they bounced back from an unfortunate own goal from Kristoffer Ajer to level through Ryan Christie before being frustrated by his former side and referee Kevin Clancy, who rejected two strong penalty claims from the visitors.

Ross Laidlaw has redeemed himself

The Ross County goalkeeper let in a howler against St Mirren two weeks ago as Tony Andreu’s weak free-kick squirmed through his body to level the scores. But County went on to win 2-1 and Laidlaw earned his team a point against Kilmarnock on Saturday by saving Osman Sow’s penalty at Rugby Park.

Goals are in short supply at Kilmarnock

Laidlaw’s penalty save ensured a second goalless draw at Rugby Park in three days and a third in four matches there. Killie have kept six clean sheets in their last seven games but have only scored five goals in their seven league matches.

Greg Stewart has forced his way into Steven Gerrard’s thoughts

The former Dundee forward had to wait a while for his first league start but he justified his selection in style. The creative forward scored once, won a penalty, hit the post, set up a series of chances and came close on a number of other occasions in a performance brimming with creativity and confidence.

Hearts’ luck has not turned

Craig Levein eased some of the pressure on him by leading Hearts to a derby win and Betfred Cup success against Aberdeen but there was more bad luck around the corner. Levein lost defender Craig Halkett to a knee injury that will keep him sidelined for several months early in his team’s goalless draw against St Mirren. The centre-back joins Steven Naismith, Craig Wighton, Peter Haring, Jamie Walker, Ben Garuccio, John Souttar and Conor Washington on the sidelines.