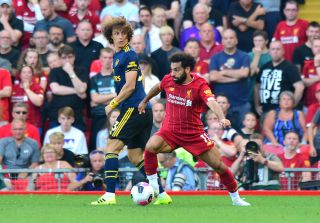 Liverpool maintained their perfect start to the Premier League season with a 3-1 victory over Arsenal at Anfield.

Joel Matip scored the opener in the first half before a Mohamed Salah double in the second. Substitute Lucas Torreira grabbed a late consolation for the Gunners.

Here, PA picks out five things we learned from the clash.

Liverpool still a step ahead

Arsenal look to have recruited well and returning to the top four should be their target for the season but, on this showing, anything more looks unlikely. Anfield has been a venue of horrors for the Gunners in recent seasons and they were completely outplayed again here.

Sadio Mane has been the main man for goals for Liverpool so far this season but here Salah stole the show. His penalty was struck with supreme confidence while his second goal was the best of the Egyptian, running past defenders and never looking for a moment like he was about to miss.

Adrian may have been the Super Cup hero but Liverpool fans will be counting down the days until Alisson Becker is fit again. After presenting Southampton with a goal last weekend, the Spaniard was shaky here in his handling and kicking and was fortunate not to cost his team again.

Arsenal gave club record signing Nicolas Pepe his full debut and it was impossible to miss the 24-year-old in his shocking pink boots. He caught the eye with his skill, too, giving Virgil Van Dijk one of his more uncomfortable afternoons despite Liverpool’s dominance. All that was missing from Pepe was precision in front of goal. He was prolific at Lille so Arsenal will hope that will come.

The good and the bad of David Luiz

Chelsea fans knew to expect a mixed bag from Luiz and, if this display is anything to go by, the same will be true for Arsenal supporters. He was one of the best players on the pitch in the first half, repelling attack after attack, but a blatant pull on Salah’s shirt gave away a penalty and he was then comprehensively beaten by the Egyptian for the third.