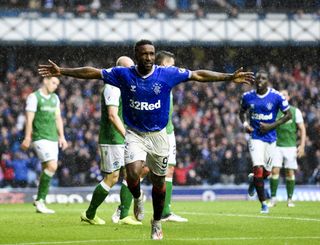 Celtic and Rangers are the only teams still boasting a 100 per cent Ladbrokes Premiership record after demolishing Motherwell and Hibernian respectively.

Here PA takes a look at five other things we learned from the top flight’s second week of action.

The Rangers striker is just two months shy of his 37th birthday but the old stager proved he has lost none of his poaching powers over the years as he tucked home a clinical hat-trick in Rangers’ 6-1 mauling of Hibernian. The Light Blues were guilty of being overreliant on Alfredo Morelos – who climbed off the bench to score twice against Paul Heckingbottom’s team – at times last season but Defoe’s hunger for goals means they should have plenty of fire power no matter who starts up top.

Kristoffer Ajer is a real right-back option for Celtic

The centre-back was told to adopt a disciplined, defensive approach when filling in at right-back in the European qualifiers but he showed he had really taken to the position when deputising for recent signing Hatem Abd Elhamed, who was rested amid a minor strain. Ajer scored Celtic’s equaliser in a 5-2 win at Motherwell after starting a move midway inside his own half and was branded “outstanding” by manager Neil Lennon.

Safety in numbers for St Mirren

Jim Goodwin’s side seemed to be every pundit’s top tip for the drop in pre-season as Jim Goodwin got down to work with a squad containing barely 15 senior pros. There were plenty among the Paisley faithful ready to press the panic button after they were dumped out of the Betfred Cup early but Goodwin remained calm, insisting his team would pick up once they signed some bodies. Nine new faces have now arrived and having put up a decent fight against Hibernian last week they have now claimed their first win by stunning Aberdeen 1-0. Keep up these displays and the pundits will be left red-faced.

Some relief at last for St Johnstone

The Saints have had a nightmare start to the new season. They crashed out of the Betfred Cup following defeats to lower league outfits Montrose and Forfar then suffered further humiliation as Celtic hit them for seven on the opening day of the league campaign. It seemed things were going from bad to worse for Tommy Wright’s men as they fell 2-0 down at home to Livingston but goals from Matty Kennedy and Callum Hendry before a last-minute Zander Clark penalty save ensured they claimed a point with a 2-2 draw.

The Hearts boss had his side’s injury curse last season to excuse some of their more lifeless displays but that is not an option this term. Hearts were at near full strength as they welcomed newly-promoted Ross County to the capital but it was the Staggies who dominated. Had it not been for Brian Graham’s late penalty miss, Levein’s side would have slumped for the second week in a row but that did not satisfy the angry home support who aimed a torrent of abuse at their manager at full-time.