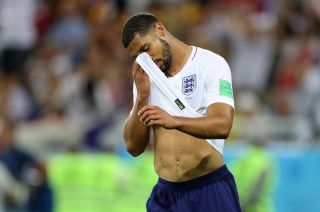 Chelsea’s Ruben Loftus-Cheek will miss the Europa League final after suffering a ruptured Achilles tendon in a charity friendly in the United States.

But at least the England midfielder was hurt on the pitch. Here Press Association Sport looks at five unfortunate players who missed out on major matches for far more unusual reasons.

Courtois was missing for Chelsea’s away trip to Manchester United in 2017, a 2-0 defeat which reopened the title race with Tottenham close on their heels. The reason? A basketball game. The Belgian had been shooting a promotional video as part of the club’s partnership with the NBA when he landed awkwardly. Courtois returned a week later and Chelsea did not lose again that season until the FA Cup final against Arsenal.

Mullery was in line to make his England debut in the summer of 1964 but was forced to withdraw from the tour of South America after injuring his back…while brushing his teeth. The midfielder, who left Fulham for Tottenham that summer, had to wait until December to get his chance but did not establish himself in the side until after the World Cup triumph of 1966.

Brazil captain Emerson missed the 2002 World Cup in Japan and South Korea after a kickabout in training went wrong. The Roma midfielder decided to play in goal for a short spell…and dislocated his shoulder. Brazil did just fine without their skipper, going on to lift the trophy, but it cannot have been an easy watch for Emerson sat at home.

Santiago Canizares missed the same tournament too in an even more unfortunate tale. The goalkeeper had been made to wait his turn to claim Spain’s number one jersey but after playing in back-to-back Champions League finals for Valencia, it was finally his. At least until one morning when he dropped a bottle of aftershave and a shard of glass severed a tendon in his foot. Iker Casillas took his place, and never gave it back.

Svein Grondalen became something of a cult hero for his physical style of play, appreciated by Norway fans if not by the likes of Sweden’s Ralf Edstrom, who was on the wrong end of a particularly brutal challenge in 1977. But a few years earlier Grondalen tackled the wrong player when he ran into a moose while jogging in the forest. The startled animal inflicted injuries which ruled Grondalen out of a World Cup qualifier against Finland.