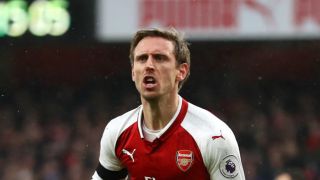 Alexis Sanchez may be on his way out of Arsenal, but the club found goals easy to come by on Saturday thanks largely to the unlikely figure of Nacho Monreal.

With Sanchez absent ahead of his expected move to Manchester United, Monreal put Arsenal in front in their Premier League match against Crystal Palace with a simple header before adding another two assists in the first 15 minutes.

The left-back set up Alex Iwobi for Arsenal's second and diverted the ball to his defensive colleague Laurent Koscielny to tap in a third Gunners goal.

Unfortunately for Monreal, after Alexandre Lacazette added a fourth for Arsene Wenger's rampant side, he limped off in the 34th minute due to an injury.

Spain international Monreal has been in unusually good goalscoring form, with the strike against the Eagles his third in this season's Premier League. He had never previously scored more than one league goal in a campaign during his whole career.

Sanchez's actual replacement at Arsenal could be Pierre-Emerick Aubameyang, after Borussia Dortmund chief executive Hans-Joachim Watzke confirmed his club had received a bid for the Gabon international.

Arsenal's rapid start, scoring three goals in the first 13 minutes, is the fastest a side has gone 3-0 up in the Premier League since the Gunners themselves raced into a three-goal lead at Newcastle in February 2011.

On that occasion, however, Newcastle came from 4-0 down to draw 4-4, Cheick Tiote's thunderbolt wrapping up one of the Premier League's most memorable comebacks.