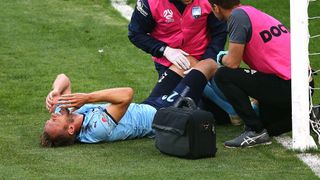 Sydney FC matchwinner Siem de Jong might have paid a steep price for downing Wellington Phoenix in the A-League.

De Jong secured a 1-0 victory with a close-range finish in the 25th minute at Westpac Stadium, where the hosts' in-form forward Roy Krishna had a late penalty saved by Andrew Redmayne.

But the 29-year-old was caught from behind by Phoenix captain Andrew Durante as he converted, lying prone on the turf as opposed to celebrating before being substituted.

"Siem obviously got hit from behind and he heard a crack," Sydney boss Steve Corica told a post-match news conference, where he also confirmed on-loan Manchester City midfielder Anthony Caceres had suffered a calf injury.

"We're not too sure of the damage – I think it's to the knee. I think his ankle got caught as well, so definitely he won't be playing on Saturday."

Sydney closed to within two points of Perth Glory at the A-League summit after the leaders were held 0-0 at home to Adelaide United – a second goalless draw in succession for Tony Popovic's men following the weekend stalemate against Melbourne City.

Adelaide. who edge up to fifth on goal difference, were in the ascendancy for long periods, although Joel Chianese almost won it for Perth in the dying seconds.

Wellington's loss meant seventh-placed Newcastle Jets were able to close the gap on the top six to eight points with a 1-0 win over bottom club Central Coast Mariners.

Jets captain Nikolai Topor-Stanley had an early goal ruled out for offside and Kaine Sheppard converted in the 54th minute following smart work from Roy O'Donovan.

Substitute Connor Pain might have equalised for the Mariners but for a remarkable last-ditch challenge from Lachlan Jackson.

Lachlan Jackson came from the clouds to deny Connor Pain an equaliser. #ALeague#F3Derby#SummerOfHeroes