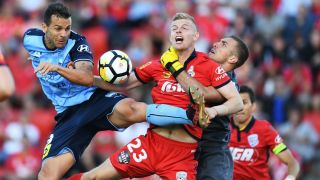 A-League leaders Sydney FC dropped points for the second time in three matches on Sunday, as they were held to a 0-0 draw away to Adelaide United.

Graham Arnold's reigning champions are six points clear of Newcastle Jets at the top of the table, but missed a chance to strengthen their grip on first place in a tense stalemate at Coopers Stadium.

Adrian Mierzejewski threatened throughout for Sydney, shooting narrowly wide from a good position prior to Strain's attempt and also calling Reds shot-stopper Daniel Margush into action in the second half, but neither side proved capable of making a breakthrough.

FULL TIME A youthful Adelaide hold the Champions to a hard-fought draw!Highlights: January 14, 2018

Earlier, Melbourne City twice came from behind to earn a point in a 2-2 draw at Central Coast Mariners.

The hosts led in Gosford through Alan Baro's first A-League goal, Ross McCormack equalising three minutes before half-time after being found inside the area by Scott Jamieson.

Jake McGing restored the Mariners' lead with a header five minutes into the second half and City had to wait until the 86th minute to get back on level terms, substitute Marcin Budzinski picking out the bottom corner with a low drive from outside the area.

This ROCKET of a strike from City’s marquee man salvaged a point in Gosford.: January 14, 2018

The draw leaves Central Coast eighth, four points outside the top six, while City are third, four points ahead of fifth-placed Adelaide.