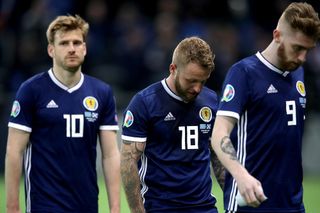 Scotland suffered arguably the worst result in the country’s footballing history as they slumped to a humiliating 3-0 defeat against Kazakhstan on Thursday.

Opponents ranked 117th in the world were expected to present little trouble for Alex McLeish’s side, but the grim result in Astana instead marked a terrible start to the Scots’ Euro 2020 campaign.

Here, Press Association Sport’s Andy Newport takes a look back at some other poor displays.

Scotland’s first ever major finals outing ended in humiliation after they were mauled by the South American former World Cup winners. The result still stands as the nation’s heaviest ever international defeat. The Scots returned home from the competition, held in Switzerland, following the defeat in Basel.

Ally McLeod’s team arrived in Argentina with dreams of winning the World Cup – but their opener in Cordoba proved to be a nightmare. Joe Jordan gave Scotland an early lead but Peru drew level by half-time and two wonderful free-kicks by Teofilo Cubillas sent McLeod’s men crashing to defeat.

Four days later, the Scots’ World Cup dream was all but over as they had to rely on an Iranian own goal to salvage a draw. Pictures of McLeod slumping with his head in his hands summed up the mood of despair.

Scotland have faced Costa Rica once before and Roy Aitken was very confident before facing a "lesser nation" https://t.co/2MqLsz9wHfpic.twitter.com/r71OoglwkT— STV Sport (@STVSport) March 23, 2018

Yet another World Cup clash Scotland were expected to navigate with little trouble – yet another night to forget as Scotland were stunned in Genoa. Andy Roxburgh’s men dominated the game but Juan Cayasso scored with what was virtually the South Americans’ only clear chance to send the Scots hurtling towards another group-stage exit.

Scotland were hoping for a new dawn under former Germany boss Berti Vogts – but they were left with a familiar feeling of dread as a double strike from John Petersen inside the first 12 minutes gave the tiny Faroe Islands control in Toftir. The shell-shocked Scots struggled to fight their way back into the game and took 61 minutes to get on the score sheet when Paul Lambert netted. Barry Ferguson spared Scotland some degree of embarrassment when he rescued a draw with just seven minutes remaining.

James McFadden’s Hampden winner gave Scotland hope that they could hold off the Dutch in Amsterdam to complete a remarkable play-off win. But it was a very different story in the second leg as Holland ran riot, with a hat-trick from Ruud Van Nistelrooy heaping fresh misery on Vogts’ team.

McLeish’s side have the safety net of a Nations League play-off if they fail to reach Euro 2020 through the traditional route, but just one game into their qualifying campaign it looks like they will be relying on their fall-back option after this mortifying defeat at the Astana Arena. As star duo Kieran Tierney and Andy Robertson were absent, Graeme Shinnie stood in at left-back but was run ragged as the Scots shipped two goals inside the first 10 minutes. Baktiyor Zainutdinov completed the rout early in the second half.