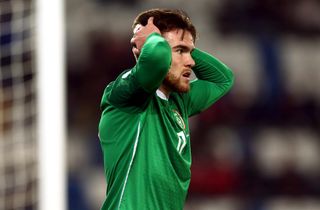 Aaron Connolly left Georgia ruing the one that got away after passing up a late chance to snatch a priceless Euro 2020 qualifier victory on his senior Republic of Ireland debut.

The 19-year-old Brighton striker came off the bench with just 11 minutes remaining and had two chances to score, forcing a solid save from keeper Giorgi Loria and then firing into the side-netting in a cameo which lit up an otherwise attritional 0-0 Group D draw at the Boris Paichadze Arena in Tbilisi.

Connolly, who marked his first Premier League start with two goals in a 3-0 win over Tottenham last weekend, said: “Like every striker, I feel I have to score that at 0-0 in a game like that. I should have scored. It’s disappointing, but I feel proud as well.

“The confidence levels are quite high because of last week and I felt if I came on, I would make an impact. I feel like I did, but at the end of the day I feel like I should have scored as well. It’s disappointing.”

Manager Mick McCarthy desperately wanted to leave Georgia with three more points in the bank ahead of Tuesday night’s trip to Switzerland, but was in no mood to be too down-hearted after seeing his side fight a rearguard action for long periods to protect keeper Darren Randolph, who barely had a save to make despite the home side’s dominance of possession.

Asked if it was a point gained or two dropped, McCarthy said: “I see it absolutely as a point won. They are a very good side, but we did hit the post and Duffer (Shane Duffy) could have scored the winner from the corner at the end.

“Aaron Connolly’s had a chance running through and Darren hasn’t made a save, so for all the possession and moving us around, he’s not made one save.

“We could have been better offensively, but defensively we were very good. If you had offered me four points in the games against Georgia at the start of the group, I’d have taken it.”

It was John Egan who glanced a fourth-minute header against the upright from a Conor Hourihane free-kick, but Ireland chances were few and far between until Connolly was thrown into the mix.

Asked if he might have made the move earlier in the game, McCarthy said: “I make the substitutions as I see fit, I don’t look back with regret and think I should have done them sooner.”

Georgia boss Vladimir Weiss was once again left to reflect upon what might have been with the nation’s record against Ireland now standing at two draws and nine defeats.

He said: “This was a match of football without many chances. We tried to win, but we didn’t have enough quality in the box. We tried shots and tried to score from set-pieces.

“Ireland are maybe also happy (with a draw) as by the end of the game, they played five at the back. Maybe getting one point from Georgia is not bad.”