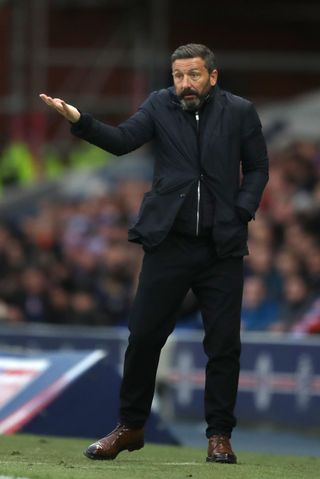 Derek McInnes has told the Pittodrie support they have just as big a role to play as his team in ending Aberdeen’s run of frustration.

The Dons faithful have not been slow in voicing their anger at a four-game run without a win.

McInnes is well aware of the depth of feeling and admitted he felt like booing his own side as they slumped to defeat against St Johnstone on Wednesday.

But he urged the fans to get behind the Reds when they host Kilmarnock on Saturday looking to clinch a place in the last eight of the William Hill Scottish Cup, insisting those sitting in the stands bare as much responsibility for the success of their team as the players on the pitch.

He said: “The frustration comes when we get the stats in. We’re dominating possession an all the rest of it. We had more than double the possession of St Johnstone the other night but we’re not being effective with it.

“So the frustration comes when it’s pass, pass, pass but without really laying a glove on the opposition. We need to ask the question more of any opponent coming to Pittodrie.

“And I do think we need to support our players and give them the confidence to perform at their best.

“I’ve been that manager when I was at St Johnstone who came up here and banged on in the team talk about how the nervousness and frustration from the crowd can affect the team performance for Aberdeen.

“I see a bit of that at the minute at home. It’s nothing that can’t be fixed and that a good win tomorrow won’t help.

“The responsibility tomorrow is to play without fear and the fans have got a huge part to play in that. I can’t stress that enough.

“I’ve done more moaning recently than I can remember so when the supporters have that natural feeling to criticise, let’s just stay with the team because my team need help at the moment and we’ve all got a role to play.

“We have the Red Shed initiative tomorrow, they will be right behind the team, it is important that we respond to it.”