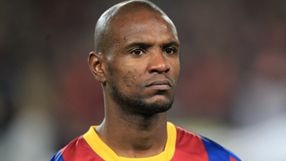 It added that the 31-year-old player "could be released within a week depending on his progress" after the surgery conducted at a Barcelona clinic.

The operation lasted approximately three hours and doctors removed the tumour without any complications, the club said.

The French international has been in superb form this season for the Spanish league leaders, who have not released details about the kind of tumour Abidal has.

It is unclear how long the defender will be out of action but any prolonged absence would be a blow to Barca, who are five points ahead of Real Madrid with 10 games left.