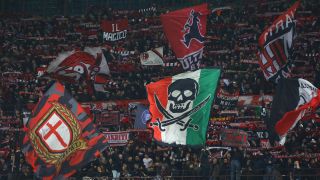 The Italian giants have been monitored in relation to potential infringements for several months and had an application for a voluntary agreement to restructure their finances rejected by UEFA's Club Financial Control Body in December.

Milan invested more than €200million in the playing squad following the takeover by Chinese investors Rossoneri Sport Investment Lux last year and their ability to repay a loan by October is central to UEFA's concerns.

If Milan are eventually penalised over the breaches, exclusion from the Europa League could be an option at the governing body's disposal.

"After careful examination of all the documentation and explanations provided by the club, the CFCB Investigatory Chamber considers that the circumstances of the case do not allow the conclusion of a settlement agreement.

"In particular, the CFCB Investigatory Chamber is of the opinion that, among other factors, there remains uncertainties in relation to the refinancing of the loan and the notes to be paid back in October 2018.

"The Adjudicatory Chamber will make a decision on this case in due course.

"The CFCB Investigatory Chamber will further communicate in June its other decisions in relation to the monitoring of the clubs under investigation or under settlement agreement."