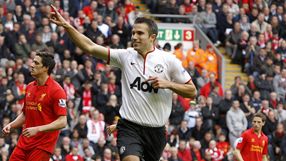 The Dutchman had been expected to leave the Emirates Stadium after refusing to sign a new contract, which had been set to expire next summer.

Arsenal haven’t picked up a trophy since 2005, which seen several high-profile players depart as a result.

And Adams believes that the recent sale of Van Persie will further hinder the club’s search for silverware.

"I think he could have played for four or five more years.

"I hope they do go on and win everything. Realistically, I think they will fall short again. I wouldn't have made that decision [to sell Van Persie].”

Adams also believes that former teammate Steve Bould may have problems in his new role as Arsene Wenger’s assistant.

"It's a blessing and a curse for Steve [Bould]. People are going to say 'what a fantastic defence' because he played defence," he added.

"And a goal goes in they're all going to be turning round to him and saying 'come on Steve you're doing a really bad job'.

"My experience of Arsene Wenger is that he's very offensive and it's going to be very difficult for Steve."