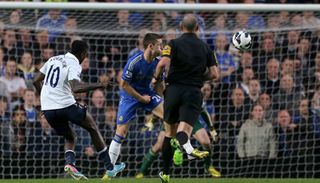 Adebayor produced his best performance for months as Spurs came from behind to draw 2-2 at Stamford Bridge in midweek with the Togo international scoring from a superb 25-metre shot after a run from his own half.

"It will be tough at Stoke, it's always tough, but if we play like we did at Chelsea, we can win," Adebayor told the Tottenham website.

"We have two games left and they will be like two cup finals for us. We have to keep going, keep fighting and those games are critical now, we have to win those matches."

With two matches to play, Chelsea have 69 points, Arsenal have 67 and Spurs 66.

Tottenham face mid-table Stoke on Sunday and their final match is at home to Sunderland on May 19.

"The Premier League is unpredictable we all know that, and all we can do is our job and hope for someone to slip up," Spurs manager Andre Villas-Boas said.

"We are not giving up and we still believe we can do it."

Villas-Boas was positive influential midfielder Mousa Dembele, who missed the match at Chelsea with a hamstring injury would be fit to face Stoke.

"Mousa will train tomorrow with the team and we expect him to come back fully fit and be ready for selection," he said.

Winger Aaron Lennon, who came off against Chelsea to rest a sore hamstring, should also be fit.