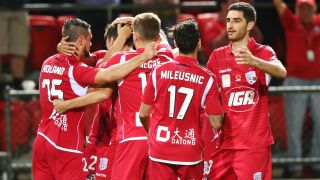 Sergi Guardiola headed an equaliser 12 minutes from time as A-League strugglers Adelaide United claimed only their second point of the season with a 1-1 draw against Brisbane Roar.

John Aloisi's visitors were aiming to close to within two points of leaders Sydney FC and hit the front with an hour played.

Brett Holman took aim from outside the box and a slight deflection off Iacopo La Rocca gave the former Australia midfielder his first goal in Brisbane colours.

But the league's bottom club earned a share of the spoils, with Guardiola on hand to convert Ben Garuccio's cross.

Adelaide remain the only winless team in the A-League but are now a solitary point behind Wellington Phoenix.