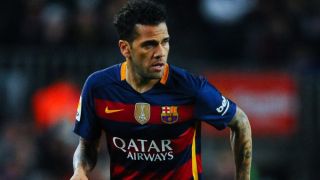 Dani Alves has found himself in hot water and could be the subject of legal action from the Spanish Sports Press Association (AEPD).

Those comments sparked a response from the AEPD, demanding Alves provide an apology.

"The Spanish Sports Press Association rejects, condemns and demands a public retraction of the Barcelona player while studying legal action, because 'such statements are subject to criminal prosecution', as lawyers consulted," a statement read.

"AEPD is confident that Alves, who is a great footballer and a very special guy, and can censor press because it's in his right to make such statements, can reconsider and withdraw his words that football is only in news for the values it represents."

Barcelona immediately moved to distance themselves from Alves' comments, however, upon hearing of legal action from the AEPD they confirmed they are supportive of the Brazil international.

"The club will provide all the support with staff, legal and administrative to Dani Alves so he can defend this complaint in the case it prospers," a club statement read.

"The club believes AEPD's complaint announcement seeks only the opportunity to undermine the public image of the player and the club.

"FC Barcelona invites the AEPD to publicly explain the actions undertaken by this organisation in similar sport cases that can be compared."