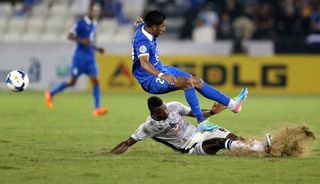 The Saudi Arabia outfit hit the road with a slender lead thanks to Salman Al Faraj's fine finish in the first leg.

And they withstood late pressure from their Qatari opponents to book a spot in the competition's semi-finals, where they will play Al Ittihad or Al Ain.

Al Sadd will rue their luck, though, after Saleh Al Yazidi hit the post just three minutes from time.

His left-foot shot beat Al Hilal goalkeeper Abdullah Al Sudairy, but came back off the upright as Al Yazidi – who headed straight at the keeper only moments earlier – was again denied.

Al Sadd dominated first-half possession, but struggled to convert it into chances, with Nadir Belhadj firing wide with perhaps their best effort.

Romania midfielder Mihai Pintilii forced Saad Al Sheeb into a terrific save at the other end on the stroke of half-time.

Al Hilal, who hammered Al Sadd 5-0 during the competition's group stages in April, found life easier in the second half.

But they were almost stunned in the 87th minute when Al Sadd, surprise winners of the competition in 2011, were inches away from drawing level.