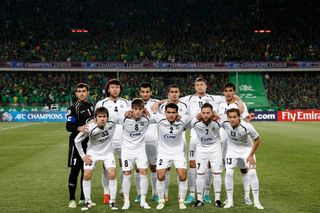 The Uzbek champions were eliminated in the round of 16 last year and desperately need a win at Foolad on Tuesday.

"The next match will be the most important for us," Qosimov said of the trip to Iran.

"If we lose or draw we will not have chance to qualify for the next stage."

Bunyodkor will be without suspended captain and centre-back Hayrulla Karimov, while Foolad – who are second – are missing midfielder Shahab Karami.

Also in Group B, Fateh are searching for their first goal in the competition with the Saudi champions in the Champions League for the first time.

In Group A, leaders Al Jazira will be confident of maintaining top spot ahead of their clash against lowly Esteghlal of Iran on Wednesday.

Vagner Love, who like Gyan has four goals in the competition so far, will be with his Group E-leading Shandong Luneng team when they host the Pohang Steelers on Wednesday.

Cerezo Osaka will fancy their chances when they visit lowly Buriram United.

Last year's finalists Seoul need a win when they take on Sanfrecce Hiroshima in Group F, which is topped by Beijing Guoan ahead of their trip to Australia to take on Central Coast.

High-flying Guangzhou Evergrande face Jeonbuk Motors in a clash between Group G's top two, while Melbourne Victory will be looking to move into second with a win at Yokohama F Marinos.

Group H sees Guizhou Renhe welcome leaders Ulsan and Western Sydney will be looking to stay second ahead of a trip to Kawasaki Frontale.