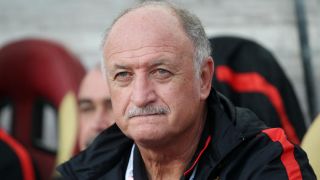 The Chinese Super League side, who have won the competition twice, drew four of their six group games, including their final outing against the Suwon Bluewings, but that proved enough.

Guangzhou were not the only former champions to book a spot in the knockout phase, with Esteghlal Tehran also going through.

The line-up for the next round will be completed on Wednesday.

GOULART AT THE DOUBLE FOR DRAW SPECIALISTS

Guangzhou, who last took the title in 2015, and Kawasaki Frontale made it through after a tense final round of matches in Group G.

Scolari's side had led the way ahead of Tuesday's games and Ricardo Goulart's double, which earned a 2-2 draw against the Bluewings, was enough to send them through in second.

It was the Bluewings who missed out after Kawasaki thrashed the group's whipping boys Eastern 4-0 to go top.

Jiangsu Suning rounded of an impressive Group H campaign with a 1-0 win over Adelaide United, Ji Xiang with the decisive strike.

The Chinese side's only loss en route to topping the pool came against Jeju United, who wrapped up second place with a 2-0 victory against Gamba Osaka.

Congratulations to and Esteghlal FC for booking their spots in the Round of 16! May 9, 2017

PHOTO FINISH IN GROUP A

Esteghlal Khouzestan's 1-1 draw with winless Al Jazira, secured by Mehdi Zobeidi's 86th-minute goal, saw them take the runner-up berth in Group B, which was won comfortably by Lekhwiya following their 4-1 thrashing of Al-Fateh.

Group A concluded with Al Ahli Dubai and Esteghlal Tehran sharing identical records, with the United Arab Emirates side edging into first spot courtesy of a superior head-to-head record.

The Dubai club were 4-0 winners over Lokomotiv Tashkent, Asamoah Gyan among the scorers, while the Iranian outfit won 2-1 at Al-Tawoon.