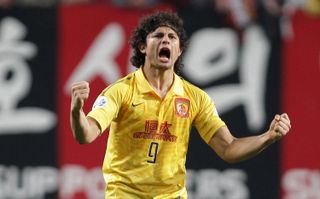 With the away goals rule applying throughout the knockout stages of the competition, Guangzhou claimed a psychological edge through goals from Elkeson and Gao Lin to ensure the Chinese champions hold the advantage ahead of the second leg in two weeks' time.

Seoul broke the deadlock in the 12th minute thanks to Sergio Escudero before Elkeson and Gao put Marcello Lippi's side ahead at the hour mark.

Dejan Damjanovic grabbed a late leveller for the hosts to ensure they are still in the tie, but Seoul know they face a tough challenge given Guangzhou have yet to concede a goal at home in the competition.

Escudero's early strike came after the visitors failed to deal with a quickly-taken free-kick and the 25-year-old coolly slotted a low drive under Zeng Cheng.

Guangzhou wasted a handful of chances to level the game before Elkeson finally beat Kim Yong-Dae, the Brazilian rising above his marker to head into the back of the net from a Huang Bowen cross.

Lippi's side were ahead in the 59th minute when Gao got to the near post to divert a low strike beyond Kim for his third goal of the tournament.

Damjanovic brought the hosts level with seven minutes to play as he was found perfectly by Escudero and made no mistake from inside the area.

The result leaves Guangzhou in pole position to record a first continental title for a Chinese team in 23 years when they meet on November 9 at the Tianhe Stadium.