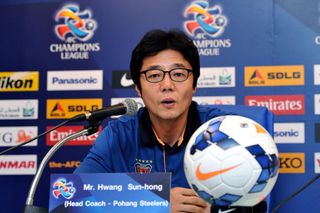 In a highly decorated career as a player, Hwang was part of the Pohang side that enjoyed continental success in the late 1990s - winning the AFC Champions League's predecessor, the Asian Club Championship, back to back in 1997 and 1998.

Some 16 years on from that latter triumph, he is now the man masterminding Pohang's challenge from the dugout as they head into their quarter-final second leg against their Korean rivals on Wednesday.

Last season, the former South Korea international striker led the club to the K-League title, as they won the championship on a dramatic final day by a point from Ulsan Hyundai, and now he is aiming to follow that up by taking them back to the summit of the Asian game.

"My best memory as a player with Pohang was winning the Asian Club Championship in 1997 and 1998, so we will try to become champion of Asia again to take our game to the highest level," he told the AFC's official website.

"To do so, we will need to get past FC Seoul first and as we've never lost away yet [in] this competition I am very confident that we can win the next game."

Both sides head into the second leg with everything to play for after they cancelled each other out in a 0-0 draw in the first game at the Steelyard last week.

Kim Jae-sung went close to breaking the deadlock in that clash, before Kim Seung-dae had the ball in the net for Pohang, only for his 15th-minute effort to be ruled out for a foul in the build-up.

Despite ultimately being left to rue missed chances, Pohang will likely start as the favourites to progress on Wednesday thanks to their unbeaten record in this year's competition.

However, Seoul showed plenty of character this time last year to make it all the way to the final, only to be denied in the showpiece by Chinese champions Guangzhou Evergrande on away goals.

And their coach Choi Yong-soo believes that home advantage could prove crucial.

"[We] have a good home record and we are very focused and confident that we can win the game in our stadium," he said.