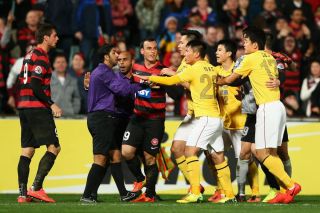 The Australian side seized the first leg initiative courtesy of Antony Golec's 60th-minute strike, which appeared to take a slight deflection off Tomi Juric.

It came as a shock to defending champions Guangzhou and Marcello Lippi's side responded badly, with Zhang Linpeng and Gao Lin seeing red in stoppage-time.

Coach Marcello Lippi stormed the pitch as the game at Parramatta Stadium ended amid farcical scenes.

But all of that will matter little to Tony Popovic and his charges, who now have a huge chance to progress to the semi-finals in next week's second leg in China.