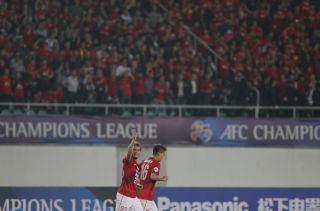 The Italy international moved to the Chinese Super League champions earlier this month, after spending much of his career in his homeland, but he took no time to adapt to football in Asia.

His debut did not get off to the ideal start, with Pablo Contreras and Leigh Broxham handing the Australian side into a two-goal lead at the break.

However, after Huang Bowen had pulled a goal back, Diamanti registered his first for his new club to level after 65 minutes before Elkeson continued his goalscoring form from last season to put the hosts ahead.

After that flurry of goals looked to have guaranteed Guangzhou the points, Diamanti completed his brace five minutes from time to cap a superb performance.

Marcello Lippi's men sit level on points with Jeonbuk Motors in Group G after the South Korean side put three past Yokohama F Marinos without reply.

The scores were level after an hour at the Jeonju World Cup Stadium but Lee Seung-ki hit a brace within nine minutes before Leonardo added a third from the spot 19 minutes from time.

"The turning point of the game came when we had to replace (striker Zlatan) Muslimovic because of injury, which changed the atmosphere of the game," Renhe coach Gong Lei explained.

Despite seeing Ali Karimi sent off after an hour, Tractorsazi Tabriz recorded a 1-0 victory over two-time winners Al Ittihad, while Asamoah Gyan was the hero for Al Ain in their 2-1 win over Lekhwiya of Qatar.

After Luis Jimenez and Grafite had given the visitors the lead at the King Fahd International Stadium, a Nasser Al-Shamrani double gained Al Hilal what had looked at one stage like an unlikely point in Group D.