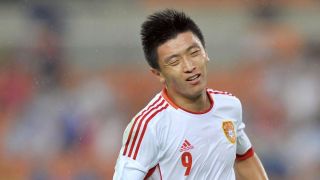 It took the hosts 43 minutes to break the deadlock at the Kashiwa Hitachi Stadium, but Kudo's opener was quickly followed by David Vrankovic's own goal.

Kim Chang-soo, Kudo and Hidekazu Otani took the game beyond the visitors before Ganiyu Oseni netted a consolation goal for the visitors.

Yang Xu was the hero and villain for Shandong Luneng in their 4-1 defeat to Jeonbuk Motors as he cancelled out Edu's opener before being sent off late on.

Following Yang's equaliser, Han Gyo-won, Lee Jae-sung and Leonardo sealed the points for Jeonbuk, with Yang then shown a second yellow for attempting to score a goal with his hand 11 minutes from time.

Korean FA Cup winners Seongnam are up and running in the competition as Ricardo Bueno's penalty and a second-half Hwang Ui-jo strike sealed a 2-0 win over Japanese champions Gamba Osaka.

The Brazilian forward struck late on to ensure a 2-1 win that moves Alexandre Gama's men top of the pool.