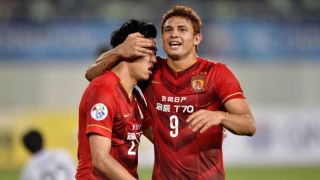 The 2013 champions were surprisingly dumped out of the competition at the quarter-final stage last term by eventual winners Western Sydney Wanderers.

But they have made an assured start to this campaign, as Wednesday's victory made it three wins from three in Group H.

Ricardo Goulart gave them the lead in the 10th minute, but they found themselves behind after goals either side of half-time from Hiroyuki Takasaki and Shoma Doi.

Evergrande look well placed to qualify from the group, holding a five-point lead over Wanderers and Seoul, who drew 0-0 in a repeat of last year's semi-final.

There was much more excitement in Brisbane Roar's meeting with Suwon Bluewings, which ended 3-3.

Brisbane were 2-0 up thanks to goals from Brandon Borello and Devante Clut, but Suwon mounted a stirring fightback and went ahead through a brace from Seo Jung-jin and one from Jong Tae-se.

Al Ain top Group B with five points after a 1-0 win at Pakhtakor, who are level on four with Naft Tehran after the latter's 2-1 home success over Al Shabab.

In Group D, Al Ahli of Saudi Arabia went three points clear at the top with a 2-0 win over Tractor Sazi, while their namesakes from the United Arab Emirates drew 0-0 with Nasaf.

Elsewhere, Gamba Osaka got off the mark in Group F and simultaneously ended Buriram United's unblemished start with a 1-1 draw.