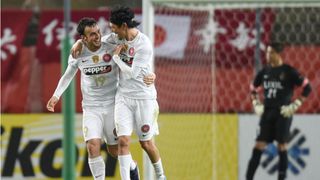 Nearly four months after their triumph over Al Hilal in last season's final, the Wanderers secured up an impressive victory in Japan thanks to two goals in the final five minutes.

After a goalless first half the Australian side took the lead thanks to a Gen Shoji own goal, but Kashima thought they had secured a point after Shoma Doi's leveller.

However, Yojiro Takahagi and Mark Bridge struck in the last five minutes to seal victory for Tony Popovic's side in a dramatic finish to their opening Group H opener.

They are joined on three points in the four-team group by Fabio Cannavaro's Guangzhou Evergrande after the Chinese champions beating Seoul 1-0 thanks to Ricardo Goulart's first-half strike.

Al Hilal began their quest for a third continental title with a comfortable 3-1 win over Lokomotiv Tashkent, the Saudi Arabian team top Group C after Foolad and Al Sadd drew 0-0 in Iran.

There was a six-goal thriller in Group D as Al Ahli of United Arab Emirates salvaged a 3-3 draw with namesakes Al Ahli of Saudi Arabia in Dubai courtesy of IIsmaeel  Al Hammadi's late strike.

The hosts found themselves chasing the game after goalkeeper Majed Naser gifted the visitors two goals, however Al Hammadi rescued a point after his captain Luis Jimenez was sent off.

Nasaf made an encouraging start to their second appearance in the competition with a 2-1 victory over Tractor Sazi.