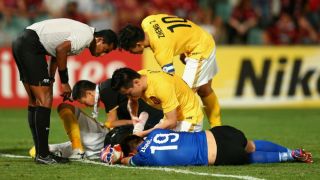 The Group H encounter at the Pirtek Stadium was eagerly anticipated given the fixture pitted the past two champions against one another, but the game ended in concern for Zeng, who received lengthy treatment after colliding with team-mate Kim Young-gwon.

The hosts drew level in the 57th minute when Iacopo La Rocca headed home from a corner, only for Goulart to restore the lead a minute later with a near-post finish.

Goulart seemingly ended the contest when he added a third with a cool finish, although the Wanderers thought they had found a way back into the game when Matthew Spiranovic had a header ruled out for offside.

Zeng's injury then brought a delay of 13 minutes as the goalkeeper was taken from the field on a stretcher. An additional 17 minutes was added on, in which time Romeo Castelen reduced the arrears for the Australian side, but it was not enough to prevent Guangzhou making it two wins from two.

After the game Guangzhou coach Fabio Cannavaro provided a positive update on Zeng when he said: "He has to go to hospital and see what the injury is, but we think he is going to be okay."

Elsewhere in Group H, Seoul got off the mark with a 1-0 victory over Kashima Antlers, while in Group G Beijing Guoan and Brisbane Roar picked up 1-0 wins against Suwon Bluewings and Urawa Reds respectively.

In Group C, Mehrdad Jamaati scored the equaliser for Foolad in their 1-1 draw at Lokomotiv, and Al Sadd earned their first win of the tournament in a 1-0 success over Al Hilal.

Tractor Sazi got up and running with a 1-0 victory over Al Ahli of United Arab Emirates.

But there was better news for Group D's other Al Ahli side - the Saudi club defeated Nasaf 2-1.