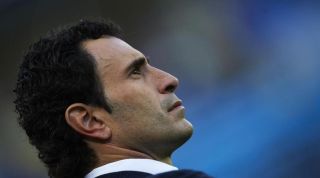 The Spanish forward continued his impressive scoring form in the competition this season with his 11th goal in 10 games midway through the second half.

Belencoso's spot-kick cancelled out Luay Al Khafaji's opener for the hosts and so the Hong Kong champions will take a slender advantage into the second leg - which will be played in a fortnight's time.

Erbil used home advantage to their benefit in the first half, as they dominated possession and created several opportunities.

The Iraqi side were unable to convert any of their four shots on target, though, and went into the break level despite their dominance.

Pressure from the home side continued in the second half and they were rewarded a minute before the hour-mark, when captain Al Khafaji opened the scoring by tapping home a deflected cross from Nabeel Sabah.

However, Erbil's lead only lasted nine minutes as Kitchee came back into the game and grabbed an equaliser through dangerman Belencoso after Ali Faez was penalised for handball.

Having been awarded a spot-kick, the 33-year-old stepped up and converted to ensure the sides go into the second leg on level terms.