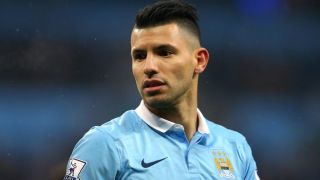 Manchester City forward Sergio Aguero says he has learned from his injury mistakes in the past and is now looking after his body better.

Aguero has spent several stints on the sidelines since joining City from Atletico Madrid for €45million in 2011.

The Argentine has missed six Premier League games through injury in 2015-16 but insists he has improved upon previous errors.

"Nowadays I’ve learnt from that and I try not to make the same mistake," Aguero told Sky Sports.

"Now I realise the slightest discomfort and I won’t risk myself, as happened to me for the home game against Sunderland in December.

"I started the previous game against Arsenal when I felt a slight pain in my knee, and I was told, ‘That’s it, you’re coming off’.

"Now I feel like I’m getting up to full fitness for games and trying to miss as few games as possible, that’s the most important thing.

"On top of that, the Premier League is so demanding that you can’t play at 80 per cent.

Aguero found the net twice and set up one as City romped past Crystal Palace 4-0 last Saturday, and the 27-year-old has warned other clubs he is still not even back to his best.

"I was happy to score twice but I was even more happy with the victory and to win the game," he said.

"As time goes on I’m getting to feel better physically and I’m getting my full fitness back, which is great. Obviously, as I get back to full fitness, the goals will start to flow.