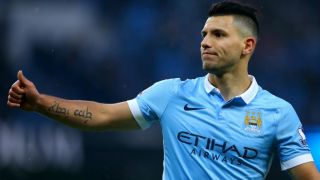 The Argentine striker scored twice and set up another as City ran rampant in a 4-0 win over Crystal Palace on Saturday.

The brace took Aguero's league total to 10 goals from 15 games, even after missing several games through injury.

And Pellegrini knows Aguero must stay fit if City are to push for a third Premier League title in five years and be competitive in the Champions League.

"We can play without Sergio, but of course we’ll be a stronger team with him playing at his best performance level.

"He’s not a player you can replace so easily. But I hope he will finish the season without any more injuries."

However, Pellegrini is confident City have the quality to make sure they can cover for Aguero as best as possible.

"But if, for different reasons, [Aguero] cannot play, we must have Kelechi Iheanacho or Wilfried Bony in a high performance level, because it’s the only way to win titles," added the Chilean manager.

"It’s impossible for a player to play all the games."