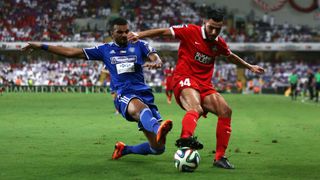 The Court of Arbitration for Sport (CAS) has dismissed an appeal from Al Hilal seeking to have their AFC Champions League semi-final loss to Al Ahli overturned.

Al Hilal initially took their complaint to the Asian Football Confederation that Al Ahli fielded Oussama Assaidi when the winger was not eligible to play in the semi-final second leg on October 20, in which Kwon Kyung-won struck a stoppage-time winner to book the UAE side's place in this month's final against Guangzhou Evergande Taobao.

The AFC decided that Al Ahli had not broken any regulations and CAS also ruled that the club did not have a case to answer - rejecting Al Hilal's call for the match to be awarded 3-0 in their favour.

A statement from CAS read: "The Court of Arbitration for Sport has dismissed the appeal filed by Al Hilal football club of Saudi Arabia against the Asian Football Confederation (AFC) Appeal Committee's decision dated 29 October 2015.

"Accordingly, the decision of the AFC Appeal Committee is confirmed and Al Ahli Club of the United Arab Emirates remains qualified for the 2015 AFC Champions League Final."